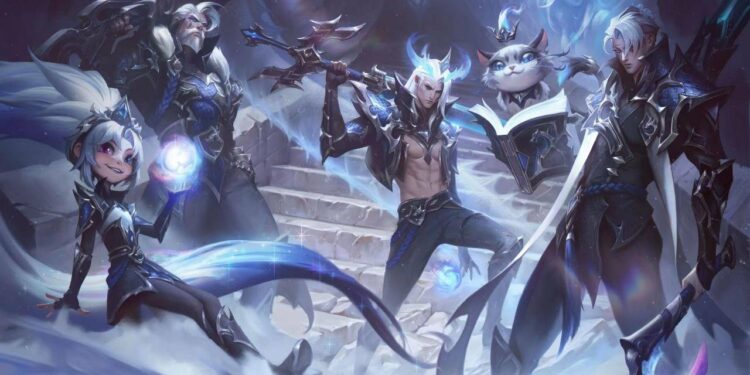 Each player has been allowed to select the champion who would receive their own skin, which includes Graves, Viego, Zoe, Aphelios, and Yuumi in this round. Each skin will be linked to a certain EDG player and will be available for purchase on the live servers soon.

With the exception of Graves, this year’s champions are all relatively new to the game with their own unique mechanics. This reflects not just a new age of champions in the game, but also the meta that was used in the World Championship last year.

Players have seen the leaked splash art before, now they can get a glimpse of how they will appear in-game. Each new cosmetic will be displayed in smooth blue and white tones, as stated in the teaser. The colors themselves give each winner a highly attractive and world champion appearance. Furthermore, each skin includes unique special effects that are related to EDG when used in-game.

Many fans have been keeping an eye on each skin’s distinctive recall animation. Riot has included interesting mini easter eggs that each create a plot in numerous of them. One of the earliest is on Graves, as he takes up Lucian’s rifle at the start of his recall animation. This is a reference to EDG top laner Li “Flandre” Xuan-Jun, who is well-known for his solo queue Lucian.

Viego’s recall animation is another easter egg. The recall indicates “WLLWW,” which refers to the order of EDG’s victories and defeats in the Worlds final.

The EDward Gaming Worlds skins are presently available on the PBE and are scheduled to be released to live servers in patch 12.9 on May 11.