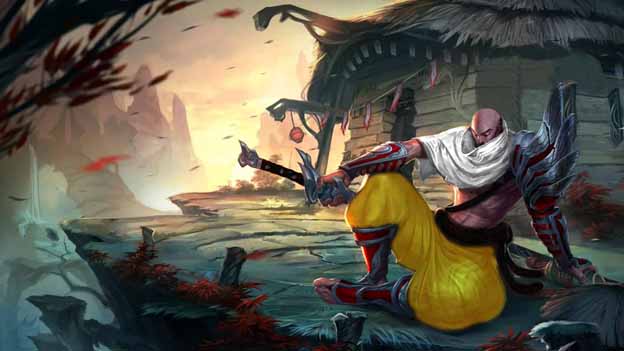 Champions look like without hair – One of the boldest and craziest ideas of League of Legends fans during this time was to shave heads for the champions in the game.

What would an League of Legends champion look like if he appeared without hair?

The League of Legends community has always been known as a very creative community with the ideas of “unlike anyone”. In the free time due to the epidemic, the community continues to think of many very strange things, and one of them is to shave heads for the champions in the game.

One of the symbols of the League of Legends – Yasuo is the first victim in this hair-down contest. The astounding aura of the famous swordsman, Ionia, suddenly became nihilistic with his hairless head. If we appear with this head in the Summoner’s Rift, our Yasuo will lose 90% of his efforts.

Aproud and noble soldier, Garen fights at the head of the Dauntless Vanguard. He is popular among his fellows, and respected well enough by his enemies—not least as a scion of the prestigious Crownguard family, entrusted with defending Demacia and its ideals. Clad in magic-resistant armor and bearing a mighty broadsword, Garen stands ready to confront mages and sorcerers on the field of battle, in a veritable whirlwind of righteous steel.

As a symbol of a strong Demacia nation, a fear for the enemies on the battlefield, but if the battle with this polished head, maybe Garen will become a comedian instead of bringing fear to the enemy.

Rengar is a ferocious vastayan trophy hunter who lives for the thrill of tracking down and killing dangerous creatures. He scours the world for the most fearsome beasts he can find, especially seeking any trace of Kha’Zix, the void creature who scratched out his eye. Rengar stalks his prey neither for food nor glory, but for the sheer beauty of the pursuit.

The fear of the ADC, one of the notorious assassins in the League of Legends, seems to be a bit dumb with this head. It’s undeniable that Rengar looks less scary with this head, but a cat without oze (rather than hair) is actually not cute at all.

Wukong is a vastayan trickster who uses his strength, agility, and intelligence to confuse his opponents and gain the upper hand. After finding a lifelong friend in the warrior known as Master Yi, Wukong became the last student of the ancient martial art known as Wuju. Armed with an enchanted staff, Wukong seeks to prevent Ionia from falling to ruin.

Still that smile, but hidden yet full of scary and more sinister with hairless style that the player creates. Perhaps Wukong is the only victim to keep himself a little scary in this “unlike anyone” game of League of Legends fans.

Zac is the product of a toxic spill that ran through a chemtech seam and pooled in an isolated cavern deep in Zaun’s Sump. Despite such humble origins, Zac has grown from primordial ooze into a thinking being who dwells in the city’s pipes, occasionally emerging to help those who cannot help themselves or to rebuild the broken infrastructure of Zaun.

Perhaps losing the hair doesn’t make Zac change too much, but even makes this guy more friendly and lovable.

It is undeniable that the endless creation of the League of Legends community.