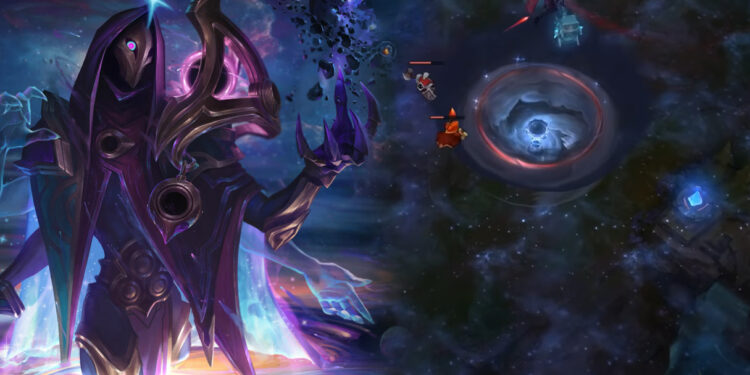 Interactions, or bugs, between champions in League of Legends continue to surprise many fans and players, especially for a huge bug-related game like League. Just recently a Leona interaction occurred right in an MSI 2022 match between Evil Geniuses and ORDER that sent the champion fly high in the sky. And now an unintentional, but still stunning, synchro between Jhin Dark Cosmic and some champions’ skin has come to light.

The interaction offered by Vandiril was universally approved by the players. In fact, the community has requested that Riot include synth-wave music in the game, since it perfectly complements the PROJECT and Dark Cosmic skins.

Jhin’s ultimate with the Dark Cosmic skin, on the other hand, is not limited to Sylas. As Vandiril also stated, the character’s ult also “captures” Zoe’s EGD skin’s E ability. It’s not as stunning as Sylas, but it still adds a unique flavor to the game.

If you’re wondering why the skin can limit other champions’ animation fields, one of the users opted to clarify.

He said in the comment section that this is due to the texture masks interacting with each other. Layer masks are used to prevent texture glitches by defining particular zones to emit a texture or effect in a limited zone or manner. EDG Zoe E applies a layer mask to limit the appearance of the galaxy texture to the circle, but it also happens to be in the same mask as Dark Cosmic Jhin R. This also applies to Sylas recall animation and Mordekaiser ult.

The explanation also provides support to the theory that the interaction identified was just coincidental. As a result, the idea that Riot purposefully concealed this information is ambiguous.