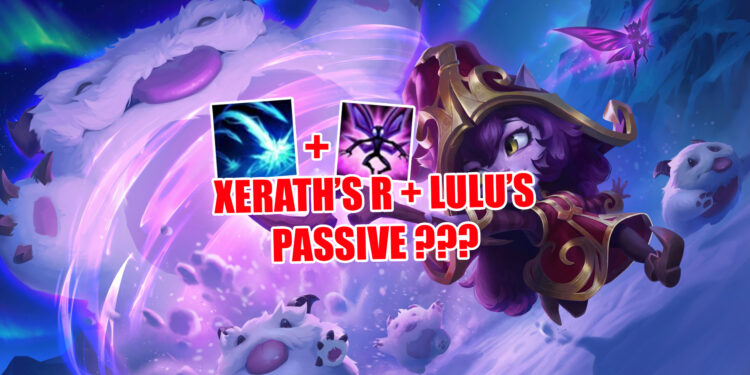 Everyone knows Lulu’s Passive, Pix, a faerie, who fires a barrage of 3 bolts towards Lulu’s target whenever she uses a basic attack. And this is the mechanism that resulted in the Bug that turned Lulu into an inter-bar cannon in the new Ultimate Spellbook game mode.

Specifically, if Lulu uses Xerath’s Ult in the Ultimate Spellbook mode, the Bug will occur, making Pix will be confused between Lulu’s auto attack and the shots from the Rite of the Arcane (Xerath’s Ult). As a result of this misunderstanding, each of Lulu’s usual auto attack is no longer followed by three lightning bolts from Pix, but replace with the asteroid discharge three incredibly quick magical shots from Xerath’ Ult.

Not only can Lulu take advantage of this, but Pix can also make any teammate to whom it attaches to experience such an effect. But this only happens when Lulu casts a spell on her allies, in this case, is W and E. After that, that ally will transform each of his auto-attack into a 3-shot cannon that will blow everything away.

This is not the only Bug that happens in this new Game mode, as the mode itself is a brand-new mode with various of errors that Riot hasn’t figure out yet. So expect more hilarious Bug throughout this game mode soon.