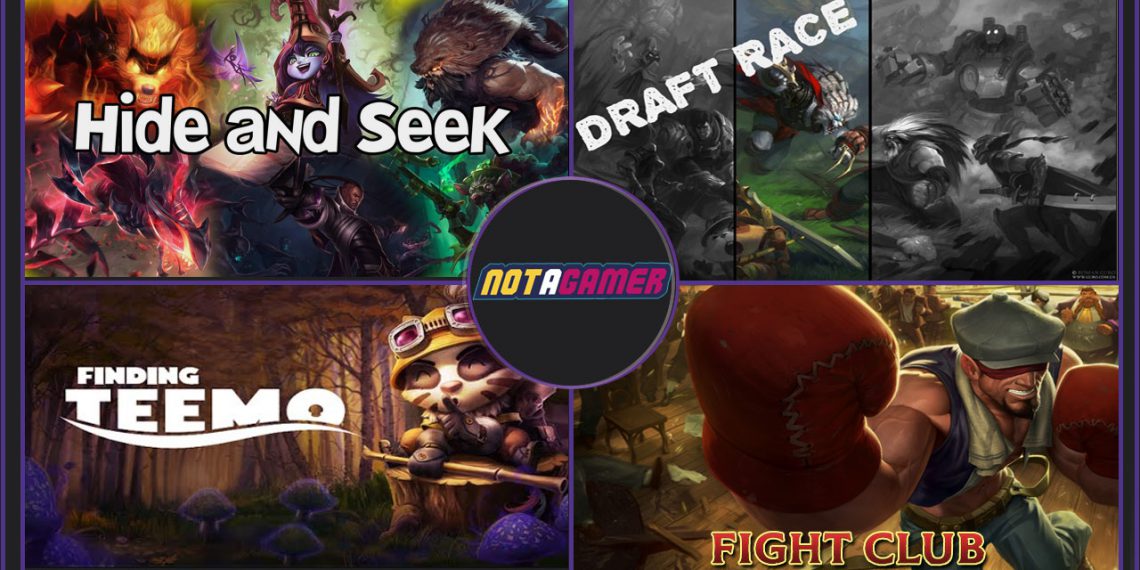 Getting bored at League but your friends keep asking to play? Here are some game modes you could try to play with your friends in Custom Game. If you have read about the first 4 Custom Game Modes, here are the last 4 modes in this Topic!

Original Game mode Rules are here if you and your friend would like to play a long game (around 30-40mins).

Here is our version of this game mode:

The game is played by 5 Hiders and 2 Seekers
Hiders have 5 lives and will hide in the map and try to escape Seekers
Hiders can’t attack Seekers, but they may use their CC abilities (slow, stun, etc.) on them
Seekers have to find and kill all the Hiders 5-10 times in 20 minutes to win

The gamemode is based on 1vs1 fights, where the 2 players will fight until one dies, when this happens the next team member will go fight the previous winner and so on until a team reaches a certain amount of total kills

•The order in which the players will go fight is determined by the champions list in the Scoreboard
ex.

The fight
•The fight takes place in the middle of the Howling Abyss
•Don’t go in your turret’s range, you are allowed to do so only if the enemy minions reach the turret
•Don’t go into bushes
•Only the 2 Health Packs between the outer turrets can be used
If a fighter breaks a rule, they have to get themselves executed

•When a fighter dies, the next champion from their team has to immediately leave the bush
•In the event of a fighter killing everyone in the enemy team in a row, two champions instead of one will come out of the bush to fight until the previous winner dies

The first team to achieve 30 kills (this can vary) wins

The objective of this game mode is running through the jungle to die in the enemy fountain and preventing the enemies from dying in your fountain at the same time.

There will be “Defender” trying to prevent the enemy Runners from dying in your fountain and there will be “Runners” try to run into enemy fountain. The first team that get 10 points wins the game.

5 vs 5: Each team will have 1 Teemo, and 2 minutes to hide in the jungle. After that, you will have to kill enemy Teemo before the enemy team kill your team’s Teemo.

5 vs 1: Teemo will have 2 minutes to hide in the jungle. They will have to find Teemo before 15 minutes.

What is your favorite custom game mode?