Bringing Cleanse and praised by the commentators, T1 Canna made his fans “fainted” when revealing that was a mistake! 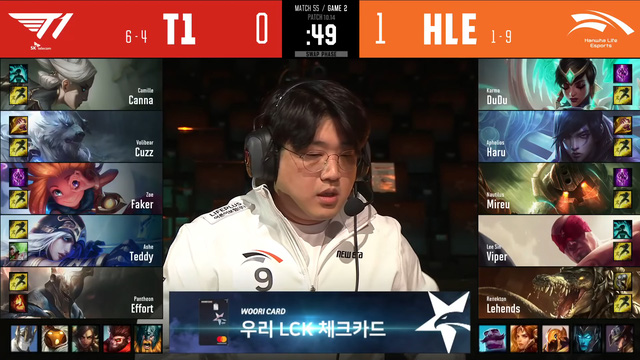 Canna has actually joined “The Forgetful Club” with his teammate Faker…

T1 has just had a tough victory against Hanwha Life Esports in the group-stage of LCK 2020 Summer Split and obviously, their performance made all of their fans got heart-attack.

T1 was surprisingly broken down in Game 1, when they already had loads of advantages but finally having mistakes at the end. Although they won the next 2 games, their unstableness actually made us worried, especially Faker.

However, everything seemed to be much more hilarious when the Toplaner of T1 – Canna, made all the audiences really surprise. Specifically, instead of Teleport, he mistakenly brought Cleanse for his Camille!

Surprisingly, all the commentators said that it was a new meta that T1 had just created, so as to help him counter Renekton’s W in laning phase and a lot of CC from the whole enemy team. Their idea then nearly became a fact when Canna got the First Blood after a solokill and brought a huge advantage for T1.

But the problem is, Canna could definitely win against Renekton of Dudu and he even didn’t need to use Cleanse in the first solokill! All in all, this spell seemed to be quite useless in his laning phase, unlike what the commentators said.

Answering interviews after the match, Canna made all the commentators and experts of LCK as well as T1’s fans “fainted” when he revealed the reason for bringing Cleanse: “Actually I forgot to change my spell so that I mistakenly brought the last game’s one”.

So obviously, there was no “tactics” created by T1. It was just a small mistake of Canna all because in Game 1, he used Quinn – a ranger with a risky playstyle, so it was necessary for him to bring Cleanse in order to get rid of CC when approaching his targets or being ambushed. However, in Game 2, he didn’t use Quinn anymore but forgot to change Cleanse into Teleport…

Conclusionally, despite having a victory – the most essential thing of a game, T1 now seems not stable at all in their playstyle as well as their players.