Runeterra MapThat Shows All The Factions And City-states | Why Bandle City Shifts Around On The Map? 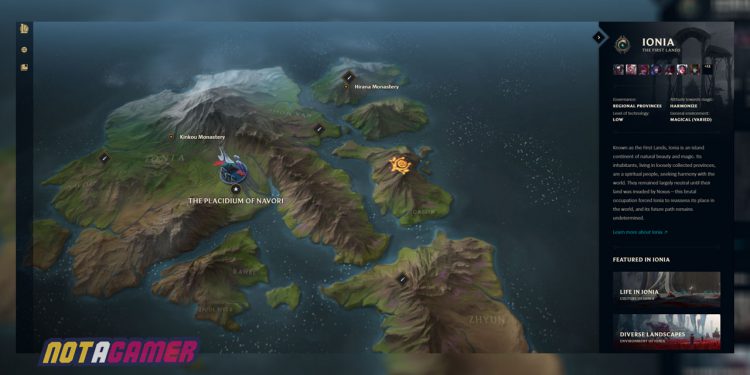 About two years ago in 2018, Riot Games released a huge interactive map of Runeterra that shows all the factions and city-states in Runeterra.

Runeterra (meaning magic earth) is an oblate spheroid planet and the fictional world where most of the lore of the League of Legends intellectual property takes place on. Runeterra is currently the only known physical realm located in the larger Runeterra Prime universe. The currently known continents the planet comprises are Valoran and Shurima.

It also boasts several large bodies of water, such as the currently known 18 Seas (like the Conqueror’s Sea and the Guardian’s Sea), and 2 Oceans with several archipelagos and islands around them (like Ionia, Serpent Isles, and Shadow Isles).

How to Use Riot Games’ Runeterra Map

Clicking and zooming in on the areas bring up a better look at the factions, along with more information. Some smaller areas have buttons to click to reveal even more. This is the best tool for those writers and/or artists to write/draw League of Legends fan-fiction.

Some areas like Noxus, Demacia, etc., even have sections on the types of citizens or creatures that live there. Besides, they also show how the area looks like with images of their buildings and environment.

There are a lot of updates since the Map first released in 2018. Now viewer can see locations that appeared in League of Legends comics and animated shorts

Where is Bandle City?

There is one location that seems really interesting and mysterious is Bandle City. This area seems to shift around on the map! Sometimes it appears in the middle of the ocean, sometimes in Shurima or in other locations. This is to allude to the fact that nobody quite knows how to find Bandle City. It’s a mysterious land to everyone.

If you want to explore the Runeterra Map yourself, you can click HERE!

Read More: All League of Legends’ Champions Lore for Those Who Are Too Lazy to Read