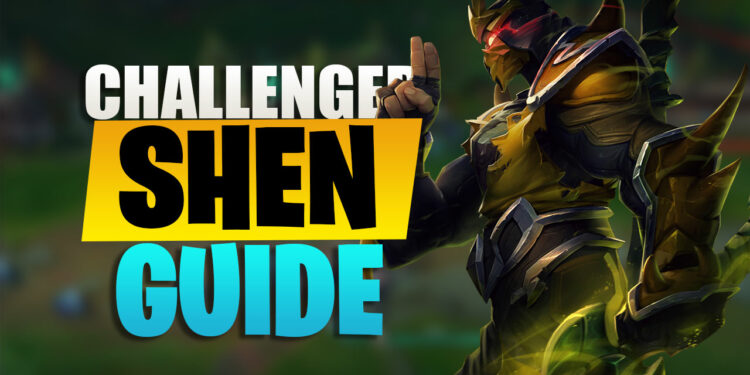 xPetu – One of the best Shen players in the world, climbs to Challenger by mostly using Shen, let’s find out how he plays Shen so well.

According to champion.gg, xPetu is currently achieving Challenger tier in the EUNE server, ranking 163th in the whole server. He mostly and mainly uses Shen to score victories, at the moment, he has played 429 games with Shen in this season and has gathered 1.6 million mastery points on his main account. On the other hand, he also has a youtube channel that delivers handy, and reliable tips for players who would love to play Shen as a top laner.

Playing in top lane can be frustrating, there are champions that are way too dominating (Fiora or Darius), way too rare (Singed, Sion), and a few others are really hard to deal with in a cheesy way (Kennen, Vladimir). The way xPetu is able to deal with all those matchups is outstanding and remarkable. We are here to share with you guys some tips that we are able to acknowledge. With Shen’s rising up in pick-rate and win-rate in Patch 10.16, why don’t you give Shen a try?

As Shen is slowly reaching top tier in Summoner’s Rift, he is proving to become one of the most reliable choices for top laner, especially if you are playing with your teammates where you have enough communication to turn a 2/3v3 team fight into a 5v3. Furthermore, even though Shen is a tank in the late game, he is incredibly strong in the early laning phase and can be considered a brawler.

In the video that we listed below, he showed us the best tips on how to win games with Shen, his 2 favorite rune pages, his summoner’s spells choices, what items to build, and explain the gameplay plan as The Eye of Twilight. One of the reasons why Shen’s playstyle has major changes is the rise of Ignite. This is because of the increased cooldown duration of Teleport. Unlike other top lane champions, The Eye of Twilight doesn’t need Teleport to join team fights, thanks to Stand United. With his ability to put huge pressure on his enemies until level 6, Ignite will help him to deliver the final blow in some matchups.

Which Rune and Items to go for.

For rune page, according to xPetu, there are 2 rune pages that can bring Shen to his full potential, but today we will bring you one of the most popular choices for almost every matchup. That is the Grasp of the Undying page, this build is designed to maximize the value of Shen’s trading kit:

For items, he has a wide variety of items for him to adapt, mainly the only core item you should buy is Titanic Hydra. All other items are optional and depend heavily on your situations. Here is how some Korean Pro Player build him.

The Spirit Blade should be placed as close to the enemy’s tower as possible for easier empowered Twilight Assault. Besides the famous Shadow Dash – Flash and Twilight Assault – Flash, xPetu also gives us some trading tips:

And when the enemy’s hp is low, xPetu mentioned how to perform the “Extended trading pattern” combo that deals a tons of damage:

Shen is a powerful champion in the early game but doesn’t scale well as the game progresses. In the laning phase, play aggressively and slow down your enemy’s income. Pay good attention to the minimap, Stand United is how he helps his team scales. Stand United should only be used when the minion wave is far from your tower except in some very crucial situations.

After the laning phase, identify the currently contested objective (Rift Herald, Baron, Dragon, Towers,..) and push the lane on the opposite side of the map. The enemy will have to send someone back from the objective or lose a tower, in case they attack your team, using Stand United wisely will change the flow of the fight (Only do this when you have Stand United if you know the enemy team locations).

That’s all we have for now, good luck in Summoner’s Rift.