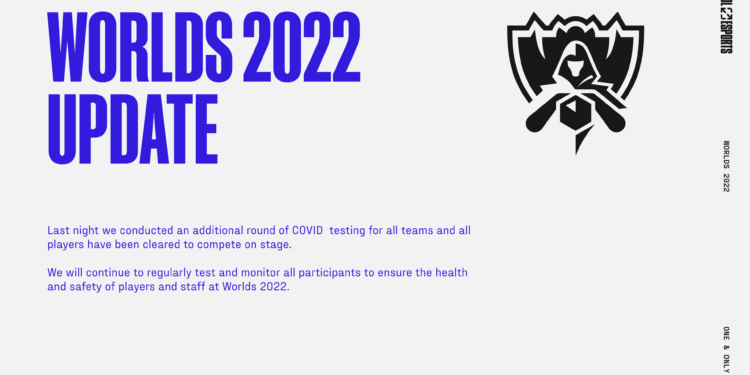 The second half of the League of Legends World Championship group stage is about to begin, and according to Riot, multiple players have tested positive for COVID. How will teams deal with such issues?

Every squad’s players, coaches, and team members must undergo continuous COVID-19 testing during the League of Legends World Championship. G2 Esports manager Romain Bigeard recently posted a video of all players waiting in line for their regular PCR test.

It has now been revealed that multiple players tested positive for the virus and will thus be forced to play under adverse conditions until further notice. Which players have tested positive, and what is Riot doing to accommodate positive teams?

Riot issued a statement outlining their policy for any players that test positively. Teams with healthy positive individuals will be able to use isolation rooms for these so they may participate in the games without being concerned about spreading the virus.

According to the official Riot Games statement, some game times may change as a result of this isolation room LAN configuration. Due to these terrible COVID occurrences, some games may be moved before the first round of matches in the second round of the group stage begin on October 13, 2022.

Just before the second part of the group stage of the League of Legends World Championship began, some of the biggest names tested positive. Prior to their day of groups, Edward Gaming revealed that their star mid-laner Scout had tested positive for COVID-19.

Scout is not the only well-known athlete that tested positive. Additionally, Gen.G has stated that Chovy, their mid-laner, will play from isolation in their upcoming games as a result of testing positive. Score and Museong, two members of their coaching staff, have both tested positive for the virus.

Star jungler Canyon of DAMWON KIA has also been found to have tested positive. Additionally, he is currently in a state of health that allows him to take part in competitions and compete alone.

The second half of the group phase is barely a day away, so it seems incredibly unlikely for now. However, if any players test negative before their games, they will be allowed to participate on stage. The players might re-join their teammates on stage if their teams advance to the following round.