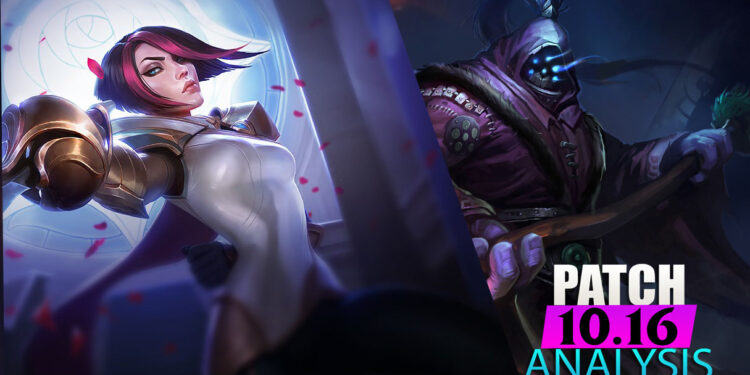 Continuing from part I, we will discuss why patch 10.16 will be potentially one of the worst patches Riot has been released, can be on par with the tank meta back in 2015.

The following buffs have been deemed by players as unjustified and outrageous, and judging by the targets that Riot gave these strength boosts to, their uproar is understandable.

An attempt to introduce split pushing duelists to pro play?

Most of the complaints across the Internet are targeted at split pushing duelists buffs done in patch 10.16, namely Jax, Fiora and the infamous ronin himself, Yasuo.

Fiora’s buff, while seen as negligible to her sticking power to her targets due to the slight nerf on the cooldown reduction on hit, is otherwise an overly reliable escape tool, a 6 seconds dash at max rank, and she always levels that ability first. It is now harder to catch a split pushing Fiora – provided if she doesn’t get strong enough to take at least three members head-on because a lower Q cooldown also means more passive procs.

Jax is supposed to be a scaling champion, but a 2 seconds reduction on his E at early rank opens more opportunities for him to cheese his opponents, especially if he/she happens to be an auto-attack reliant champions. Therefore this adjustment will give him a much easier time snowballing into a late- game powerhouse where he just beats everyone to oblivion with his lamppost.

Yasuo’s buff is the hardest to fathom since he is one of the champions in League that should always be kept in the gutter no matter how low his win rate is. The 25% bonus AD ratios buff on his R will give him more AOE damage later on, while the slight MR buff makes him fare better against magic damage poke. This adds up to his already broken kit helping him nullify incoming ranged damage, making him an impervious pick in the mid lane.

While the buff to Evelynn is meant to make her more flexible for solo lane, this actually turns Eve from an already annoying jungle pick to deal with to a mid – late game monster where she just spams Q non-stop. Evelynn’s kit is only designed to function in the jungle, hence it’s not likely to see mid Evelynn like how it was in her pre-rework incarnation. But her DPS later on, regardless of the role, will be atrocious.

Morgana’s Q should not be a spammable ability, but Riot just made it into one anyway in patch 10.16. Her Q will receive a 1-second cooldown reduction. While this might not seem a lot, in team fight it will add up, and it’s not pleasant to be constantly under a 3 seconds root every 6 seconds, in addition to another 1.5-second stun. Mage Morgana will be undoubtedly strong, as she can follow up with a second Q once the maximum 4.5 CC duration goes out, adding another nuke and 3 s root into the combo.

Other buffs featured in patch 10.16 are Akali’s E being turned to dealing magic damage so her kit has better synergy with magic penetration, Ziggs’ passive being buffed so he can destroy towers while being able to stall the game, as usual, Lucian’s damage buff despite being a strong pick at the moment, same to Hecarim, Rakan’s unneeded engage buff and a few others minor buffs.

What Riot could have done better.

Instead of making changes every fortnight, Riot could have increased the waiting time between patches. Maybe three weeks or more for them to come up with concrete decisions. Also – perhaps it’s time for Worlds to have its own set of patches to determine the meta, rather than forcing the casual player base to go along with the tournament. It is not healthy for the game, Overwatch experienced the same degeneration thanks to the advent of pro play which hampered the balance of the game.

Hopefully, patch 10.16 won’t affect the effort of players trying to climb ranked near the end of season 10.