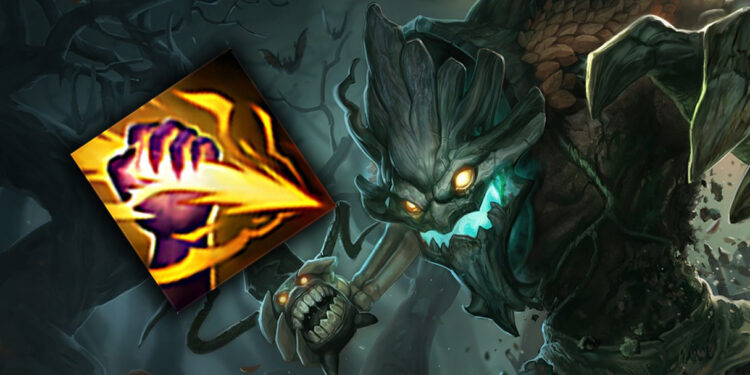 While it is a tough strategy to cope with for teammates, roaming Smite top is still without a doubt a broken playstyle

Smite top strategy isn’t something new as it has been used aggressively, but some Rioters feel the meta is a little trolling. A Diamond-ranked EUW player earned a 14-day ban for implementing the tactic with champions such as Yuumi and Maokai.

While Smite top was first meant for champions such as Janna, it is now having all kinds of champions using it. Zilean, Bard, Poppy and even Yuumi have been dominating the top lane by taking Smite and roaming across the map.

With the gold nerfs on Support item sololane coming in patch 12.4, players are taking all of their time left to abuse this strategy. One player by the name ‘Yuumi Top OhTeeP,’ has sat in high Diamond after employing the tactic on a variety of champions, including Yuumi, Nami, Zilean, and Maokai. With 300 games played, he has a 56% win rate in Diamond 1.

However, he received a 14-day ban following a particularly terrible game on roaming Smite Maokai in which his KDA was 1/7/1. According to a Riot support, it was clear that his playstyle was assisting the enemy team.

“You left the top lane and stayed around the drake only to avoid gaining XP and gold for the rest of the match,” even though this is a part of the strategy, leaving the top lane to roam around and help teammates.

“I’m very scared that I’m going to get my account permanently suspended in the future if this 2 week ban doesn’t get lifted and I continue playing this strategy.”

“This feels very unfair to me, I’m getting banned for ONE SINGLE admittedly bad game that I’ve played where we all fell behind and my strategy didn’t work.”

Even though roaming Smite top is not about the type of champions you play, it’s about the way you play the tactic. Bard and Poppy were recently played with this meta in competitive tournaments, and both of these champions won their games. Still, roaming Smite Maokai isn’t the best option you end with as his kit doesn’t have any mobility features to roam, but for one bad game to get a ban is just not fair for the player.

For now, Riot has yet to unban him and continues to state that he was ‘trolling’ in that match.