Reworked Dr. Mundo can gain up to 750 AD with only Tank items 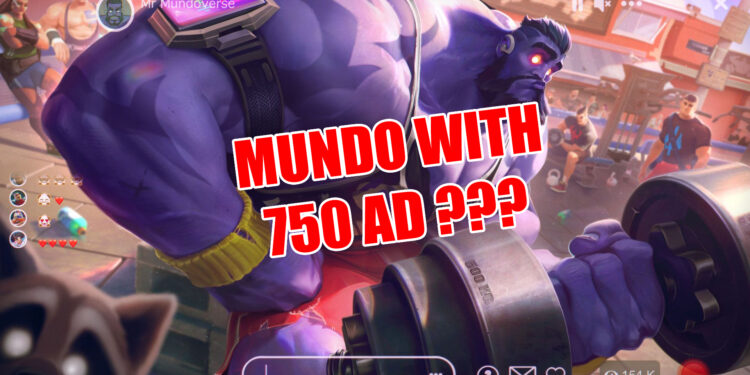 Even after being reworked, Dr. Mundo even got some new significant skill set that allows him to gain even more AD.

After a long delay, Dr. Mundo was finally reworked with an entirely new appearance and skill set. This revelation instantly piqued the curiosity of many players, and many of them had their first encounter with the new Dr. Mundo.

Vandiril, the king of exposing League’s Bug, has also had the chance to try out the new champion on the PBE server, and his strength can astound many.

In the video clip, Mundo’s build-path comes in a similar of a bruiser-tank items such as Goredrinker, Thornmail, Warmog’s …

Eventually, Mundo’s HP reach over 5000 when he reaches the maximum level and has all of the following equipment, making him a genuine bruiser-tank in the latter phases of the game.

Mundo’s ability to recover is super impressive, as it just takes a few seconds after getting shot by a turret to recover near to the full health. Mundo’s new Ult is also a very powerful skill for recovering a certain of health based on missing health and continuing to recover the maximum health for an extended period of time.

We all know that Dr. Mundo has to himself the perfect tank kit while healing constantly, but with the new rework, Dr. Mundo can gain up to 750 AD whiles being a full tank. This is due because of his new E and R:

Passive – Dr. Mundo has bonus attack damage increasing based on his missing health.

Active – Dr. Mundo slams his “medical” bag into an enemy, dealing physical damage based on his missing health. If the enemy dies they are swatted away, dealing this ability’s minimum damage to enemies they pass through.

Dr. Mundo pumps himself with chemicals instantly healing a percent of his missing health. He then heals a portion of his maximum health over a long duration, gaining bonus movement speed and attack damage while healing.

This has allowed Dr. Mundo to not only possesses an extremely tanky kit, but even more killing potential with a huge amount of AD. We don’t know for sure if this is a bug or a new feature for this reworked champ but for sure in the future, with his exceptional resilience, Mundo will most likely become the next hot pick in the top lane.