Riot to change Chemtech Drake after buffing it in patch 11.24 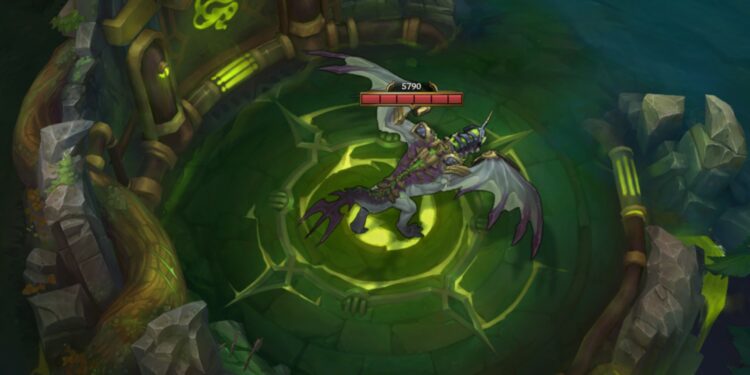 The preseason updates for League of Legends Season 12 are already on the way, and one change stands out above all others, the Chemtech Drake

Riot Games has revealed that they are testing Chemtech Drake adjustments, including how the dragon buffs affect Summoner’s Rift and how impactful the Dragon Soul ability may be in the game.

While the Hextech Drake and Hextech Soul initially drew the most attention due to their unusual playstyle and crazy damage, the Chemtech Drake, on the other hand, being criticized for being “broken” and “not fun to play with”.

To begin with, the entire Summoner’s Rift map has been altered to eliminate bushes on both the red and blue buffs and to create a camouflage field. Secondly, the Chemtech Soul, like Sion’s passive, allow players to revive after dying in a team fight.

Then, Riot dropped patch 11.24, which featured a buff to the Chemtech Drake and a nerf to its Soul before announcing modifications early in season 12.

The dev has already reduced the damage of the Chemtech soul to 7% and cut 1 second off the revive ability, reducing it to 4 seconds from five. They also included a soul revival indication to provide clearer information about the player’s zombie statuses, as well as 1% extra bonus damage every drake boost stack.

“we’re shipping a small change in patch 12.1, adding some Scryer’s Bloom plants in locations that should improve the defending team’s experience in their own jungle. We knew that the Chemtech Drake would be a spicy addition, and we’ll continue to keep an eye on it.”

The proposed modifications, some of which have yet to be published, are intended to enhance the defensive team’s experience in their jungle.

With that being said, players also mentioned the Drake as being unfun, or “being the most oppressive to play into my experience”. Riot should really consider changing players’  view of points of the Drake as soon as possible.