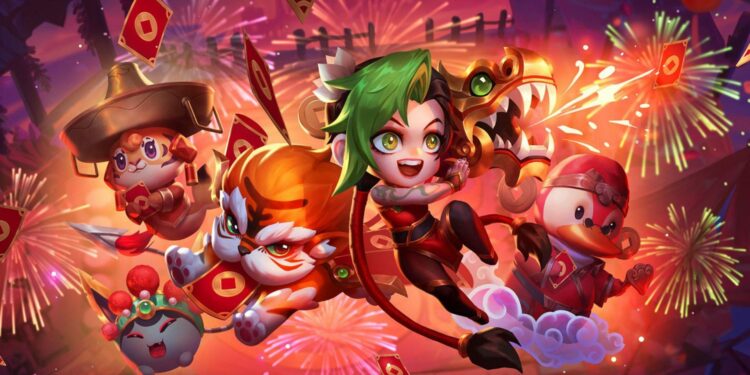 Riot Games is honoring the Year of the Tiger by staging a TFT in-game event to award players simply for playing TFT in the new year, as is their annual practice. TFT Gifts of the Golden Lantern will be available at Patch 12.2 and will include a new set of Chinese New Year-themed cosmetics, many of which will be available for free.

The celebrations will begin a little earlier in-game, with the chance to collect free Little Legend eggs, emotes, and more.

In preparation for the Gifts of the Golden Lantern event, a number of new Little Legends have been introduced to the PBE. New Duckbill, Dowsie, and Dango are included, as well as a Chibi Firecracker Jinx with its own explosion.

A new Golden Tiger Market Arena will be added to these, with lots of poros to witness the combat and celebrate the Lunar New Year. All of these Little Legends and Arenas should be available during the event, or you could find them in the Festival Firecracker or Year of the Tiger Eggs.

To get entry to the Gifts of the Golden Lantern event, you must first accept Duckbill’s invitation in-client. All you have to do now is jump into a game and the tasks will appear. To receive prizes, you’ll need to talk to each of the Tacticians during the festival and complete in-game tasks.  No details on the tasks have yet to be announced, but players should expect them as soon as they’re released.

The list of prizes has already been made public in the press release. Players may expect to receive 180 Star Shards during the length of the event, which can be used to level up their Little Legends. Players can also get one Festival of Beasts 2021 egg, which may contain a Choncc, Shisa, or Furyhorn from last year’s event with a Chinese New Year design. One Year of the Tiger egg is also on the list.

This egg, like the last TFT event, Skyglass Origins, may contain a Mythic Little Legend. Players will also receive a new special Emote, as well as a Festival Firecracker containing one of three new festival version Little Legends or Chibi Firecracker Jinx.

When Patch 12.2 reaches live servers in a few days, all of these will be available as part of the TFT Gifts of the Golden Lantern event and will continue to be so until patch 12.3.