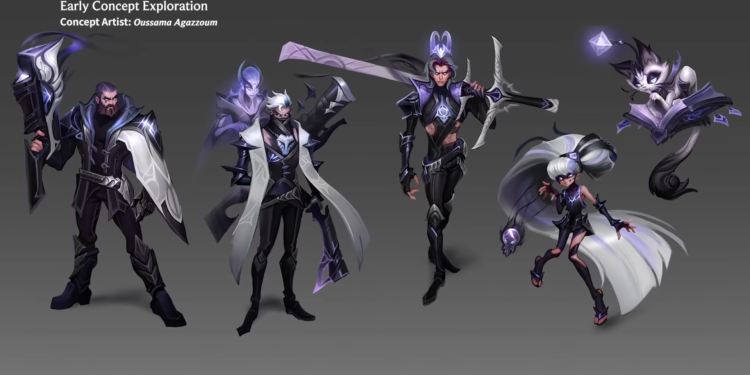 Want to know what the early concepts of EDG skins looked like?

Riot Games has released a video detailing the production of the EDG 2022 Worlds Championship skins. The nine-minute video takes viewers through the early development of the skins, from their initial concept to the final outcomes that players may obtain via the League of Legends client.

Following EDG’s triumph at the League Worlds last year, each player was given the option to choose the champion who would receive their own skin, which included Graves, Viego, Zoe, Aphelios, and Yuumi.

The video showcases team members discussing their skin concept ideas. Each player describes aspects they would want to see included in the skin set, such as knights, armor, creatures, darkness, and evil. The two Art Directors, Brian Vinton, and Ryan Ribot, then discuss the topics that informed the first conceptions, while showing off the skins’ earliest concept arts.

Lipan Liu, the Concept Lead, and Duy Nguyen, the 3D Character Art Lead, discuss the features added to the skins to complement the thoughts of EDG players, with a focus on how Chinese-style armament was placed on the skins of all champions. According to Xin Tao, VFX Lead, some of the champion’s animations were extremely significant when it comes to the overall thematic, adding to the complexity of what the skin set implies.

Furthermore, the EDG players explain why they choose each champion, such as their performances at the tournament. They also describe the sentiment they want to portray with the champion recall animations, like Graves’ recall, in which he pulls out Lucian’s gun, referring to EDG top laner Li “Flandre” Xuan-Jun, who is well-known for his solo queue Lucian. Or Viego’s recall animation shows “WLLWW,” which is the order of EDG’s wins and losses in the Worlds final.

All of the skins are already available for purchase in the League client’s store, along with icons, chromas, and champions.