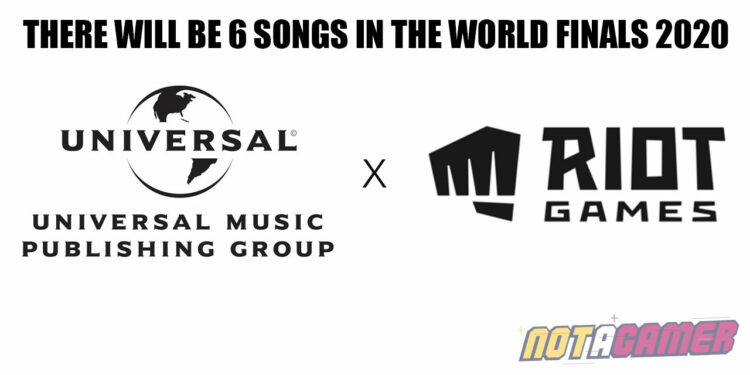 According to a secret intel, this collaboration is not cursory but will be very intensive with up to 6 songs just to promote the World Finals 2020.

Recently, the Universal Music Publishing Group (UMPG) has officially spoken out about the cooperation with Riot Games China (Riot Games) to initiate the music composing with the theme – eSports spirit.

As far as we know, Riot Games and UMPG cooperation tend to compose new songs for the promotion of Season 10 World Finals 2020. The annual title song (such as Rise, Phoenix …) will still mainly composed by Riot Games.

With an incredible group of singers / musicians including world-class names like Beyond, ABBA, Adele, JustinTimberlake, U2, Keith Urban, Zedd…. League of Legends community is looking forward to the upcoming songs as a result of this combination.

However, according to Daniel Ahmad – a writer specializing in eSports market analysis – this collaboration is not cursory but will be very intensive with up to 6 songs just to promote the World Finals 2020.

Since 2014 with the release of the MV opening the World Finals Season 4 – Warriors, every days, the media team of League of Legends has released more quality products, music videos, and champions introduction videos, or short films with the quality equal to “Hollywood standard”. Due to the reasons stated above, Riot Games has been ridiculed by the gaming community about a game company that “Makes music videos better than their own game”.

With the cooperation with Universal Music Publishing Group, the world League of Legends communities are looking forward to the upcoming songs and hopefully it will be able to achieve the quality of its predecessors like K/DA or Warriors – Imagine Dragons.