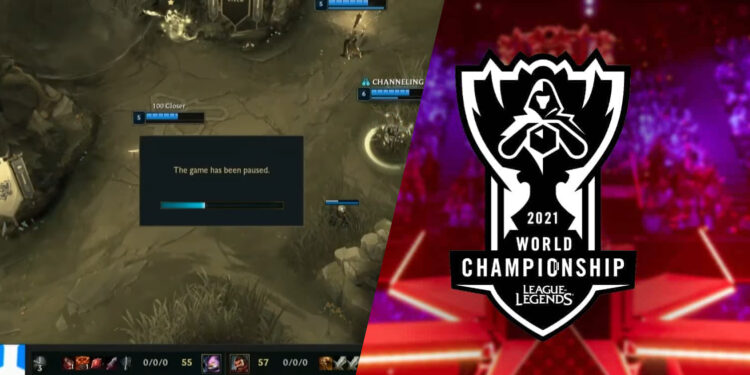 If you recall back on October 16, matches with EDward Gaming were frequently paused halfway the game. Of course, stopping the game during a major competition like Worlds 2021 is not unusual. However, when this occurred many times in the same match, viewers began to doubt the true cause.

And, only one day after, the League of Legends community officially learned why the match was paused in the middle of it.

Specifically, throughout the match, EDward Gaming player Meiko crashed the game many times for unclear reasons during matches versus T1 and 100 Thieves. The game’s continual stoppage made that day of competition exceedingly exhausting for both the participants and the spectators to watch.

Having a game collapse like that is already incredibly inconvenient for both the viewers and the players. As a result, for professional players who are intensely focused on competing, this tendency has a minor influence on competitive psychology.

When we look at Meiko’s expression in the video above, we can tell that he is highly irritated in such a circumstance. This had an effect on Meiko’s attitude during the match against 100 Thieves, which may have contributed to EDG’s defeat.

Riot Games has received not less criticized from the League of Legends community for allowing this to occur during a big event such as Worlds.

“This has to be the most ridiculous thing to subject a player to a “professional match”. The fact that this happened to a LPL team is probably why people aren’t calling for blood on reddit.”

The post on Reddit forum showcasing the crash has already got 95% upvoted and the community didn’t hesitate but to speak the truth about Riot Games handling the situation.

Hopefully, Riot Games will soon resolve the issue so that it does not severely impact Worlds 2021 for the remainder of the competition.