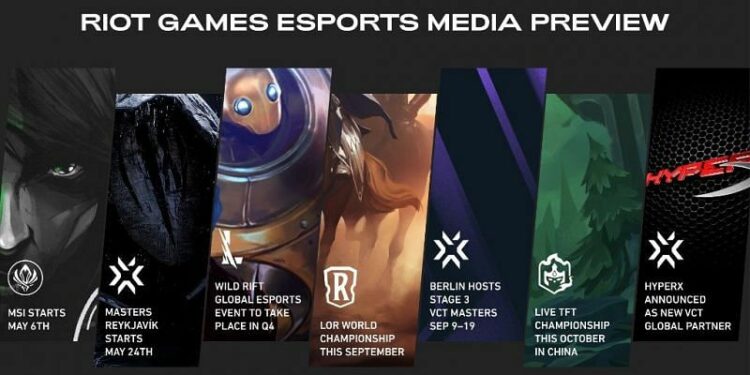 Riot Games made a whole slew of promising news recently on their social media account about their plans for the esports events of the future that includes: League of Legends, Valorant, Wild Rift, Teamfight Tactics, and Legends of Runeterra.

This Esport Media Preview is said to be the standard of all the upcoming plans for this year.

The MSI event of League of Legends was held on May 6th just now in Reykjavik, Iceland. This event will be thought to be come through with a lot of amazing in-game event for players to play and watch so as they can join in like any Pro players. For the full in-game events post will be here.

With Valorant’s VCT Stage 2 Masters beginning on May 24th at the same location as MSI’s, Riot Games has also revealed exciting new details for the Stage 3 Masters LAN event. The VCT Stage 3 Masters will be held in Verti Music Hall in Berlin, Germany and run from September 9th to September 19th.

Also, Riot Games has announced a new VCT Game Changers NA event, funded by Verizon and hosted by Dignitas. The prize pool for this NA all-Valorant women’s tournament will be $50,000, with an open qualifier on June 19-20 and the main event on June 24-27.

Riot Games announced that all regions will kickstart esports events for League of Legends: Wild Rift this summer from June. More and more, Riot also announced Wild Rift’s World Championship series, which is set to take place in the 4th section of 2021.

Following is guidelines for third-party Wild Rift tournaments in the near future. This will contribute to the development of League of Legends’ burgeoning esports ecosystem globally.

According to Whalen Rozelle, the senior director of esports for Riot Games, the first ever global championship event of Teamfight Tactics will be held in China in October 2021. More information regarding the event will be shared by Riot later on.

Riot Games also announced a world championship event for Legends of Runeterra, the card game of the Riotverse, which will kick off in September this year.