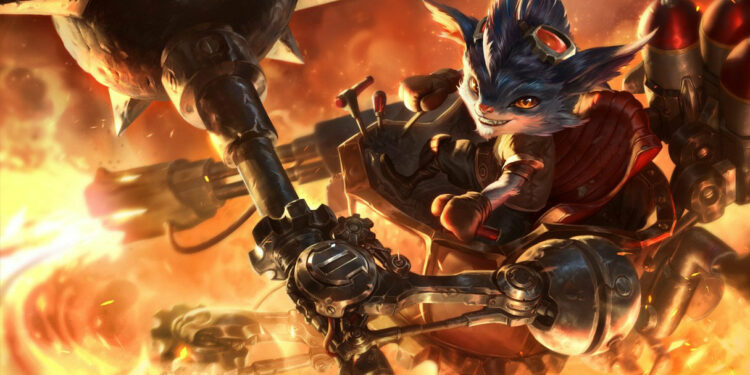 With just a few minor tweaks, Rumble became a hot pick jungler during the MSI 2021 with an almost 100% ban/pick ratio.

The Mechanized Menace – Rumble had an outstanding debut at this year MSI as one of the best pick of the entire tournament.

Following the significant nerfs of the two items: Turbo Chemtank and Deadman’s Plate, the power of the Udyr and Hecarim have been reduced relatively as they no longer dominate the Jungle meta. However, even after being nerfed, these two champions still possess the strong clearing ability in the very early game.

The alternative options except for these two champions above are choosing one with similar jungle clear speeds. As a result, AP junglers such as Morgana, Nidalee, and Fiddlesticks have become good choices to replace Hecarim and Udyr in patch 11.9. And Rumble is also one of these with a super-fast clearing speed. Notably, on the first day of the MSI 2021 match, the Mechanized Menace is currently having a 100% ban/pick ratio.

To decode his surprisingly new power, in patch 11.8, Riot made a major tweak to Rumble’s passive and gave him a strong clearing ability. Specifically, during the Overheated state, this yordle will deal additional damage equal to 6% of the target’s maximum health on-hit and will have an additional 50% attack speed.

The above change has made his jungle clearing speed, especially when dealing with single-target camps in combination with Q, which do not reduce damage to jungle monsters, very much faster. In addition, this champion’s early combat ability is also improved a lot when his E spell has the effect of reducing magic resistance.

With Udyr, Hecarim became much weaker picks in the tournaments, the oppoturnity had been wide opened for Morgana, Rumble, Elise, Diana and other Jungler in the current meta. If you want to climb with Jungle, Rumble will be one of the best pick for you in this Patch.