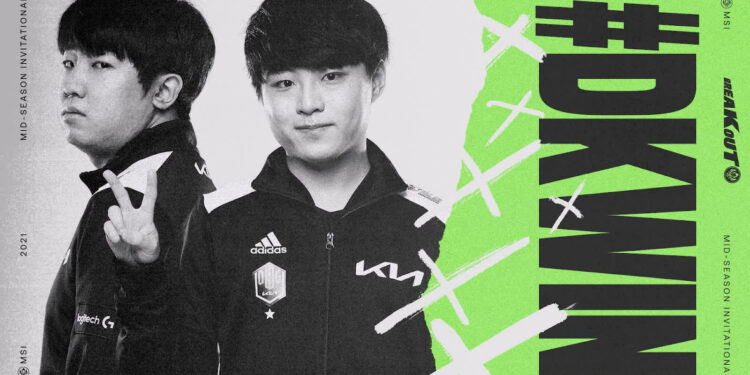 No surprises happened on the day of the opening matches of the MSI 2021.

MSI 2021 officially opened with the first matchday on May 6, with the opening match between DWG KIA vs Cloud9. Along with that, 5 other match pairs also took place with a fairly familiar and somewhat … boring scenario, when the highest-rated teams all win.

Meanwhile, the performances of the representatives of the Wild-card could not satisfy the fans. The matches with these teams are of low quality of expertise, while the fights between them and other major regions have not left any impression.

One of the most notable highlights of the MSI opening day was the first match between DWG KIA vs Cloud9. In terms of name and class, this is also the encounter between the two top and mid laners in this tournament: ShowMaker and Perkz.

MVP CKTG 2020 – Canyon has helped DWG get an easy victory in their opening match against MSI 2021 with a “new meta” in the jungle area.

Although it was expected that the tournament would have many difficulties due to the earthquake in Iceland, but in the opening match of MSI 2021, DWG KIA (DK) and Cloud9 (C9) played relatively smoothly without any big problems.

In the first match, DK showed the attitude of the world champion when they won convincingly against the number 1 representative of North America.

But DK’s bravery is still something C9 can not pass, key members of DK still do too well. DK only lost 1 turret’s plate, plus the lead in creep score wiped out the advantage that C9 had initially.

Although soon leading to the kills, but C9 could not solve the Morgana jungle problem. The ability to quickly clear monsters helps Canyon out level completely before Blaber’s Kindred. Having a great advantage in the position of jungle and top lane, DK easily held the game in hand with exemplary combat situations.

On the other hand, despite losing the No. 1 candidate for the MSI 2021 championship, C9 is still a highly-rated team in Group C. So DetonatioN FM and Infinity Esports will have to work hard if they want to compete for the second position with C9.

At the end of the first match, DK temporarily rose to the top of Group C with a 1-0 result, many predicted that the champion would not have to receive any loss in this group.

However, in a day without many highlights, the two were overshadowed by another name: Khan. DK’s top laner was the one who “choked” C9 with his destructive performance.

In addition, on this matchday, many new cards were tested by teams, such as mid-lane Lee Sin, Morgana, or Rumble jungle … Of course, not all of the tests also succeeded.

DWG KIA and Royal Never Give Up both the top contenders, for a day of playing with the underrated teams, did not hesitate to experiment with options under the “new meta” in jungle position, with Morgana in the hands of Canyon and Wei’s Rumble.

And these selections have left a mark, showing terrifying power if it falls into the hands of qualified players. While Canyon’s Morgana possessed a tremendous amount of resources against C9, Rumble was used by Wei as well, giving RNG an easy victory over PGG.

Another bright candidate for the top spot is MAD Lions, who also had a devastating victory over PSG Talon. Defeating the strongest opponent in Group B with ease, the European champions showed they had enough strength to dominate this group with the lead.

You may not already know: The 2021 MSI tournament saw the first female player participation since its establishment!

You may not already know: MSI Clash is on LOL now!