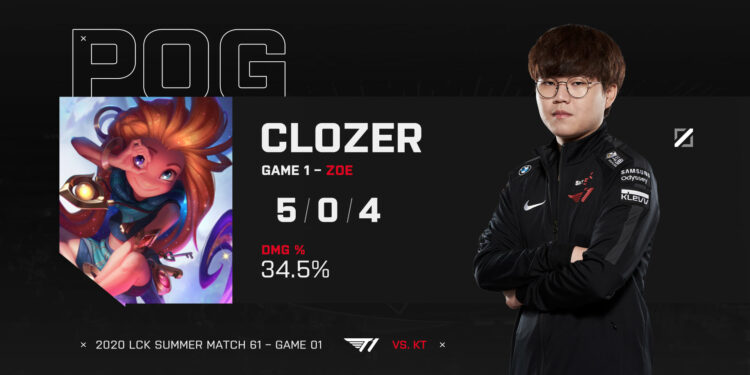 As well as Clozer, Faker also had an impressive debut day in previous years.

On July 31, T1 won a convincing 2-0 victory over KT Rolster, thus maintaining the opportunity to chase the top LCK Summer teams this year. Besides the “Telecommunications War,” this match also attracted the most attention, with 17-year-old Clozer replacing senior Faker.

Clozer had excellent Zoe performance in game 1 and was interviewed by the press after the match. Although a young player, he soon became trusted in Faker ‘s position. As this was his first debut as well, he couldn’t help but feel nervous, but amazingly he still brings victory for T1.

Clozer reveals that the team had a plan to get him to play last week, and that was true in the 7th week of the tournament: “After knowing that I was chosen to play, I tried hard to win today.”

“As I said, I was really worried about it. Ellim has encouraged me that this is a wonderful opportunity and that my life can change after today. The other players also gave me advice through Kakaotalk, they ‘re always standing by me and helping me to get more mental motivation. “- he shared.

Speaking of Clozer’s “opportunity to change life” if he retains a consistent style like Canna, he will absolutely replace Faker in future tournaments, pursuing his senior to win the major titles. The pressure is high, the possibility of disappearing after a few opening matches is entirely possible if he can’t overcome.

Back to the KT match-up happenings. Clozer was confronted with the two mid laners, Kuro and Ucal. However, the one that he is most worried about is Chovy because DRX’s mid lane always finds the opponent’s weaknesses and has a good move and equipped to counter.

With youthful and aggressive play, Clozer wants to play Irelia and Lucian in the middle, the handedness cards in this player’s solo queue. He surprised the team when asked about the ideal model by selecting Crown, SSG’s former mid-laner, who beat Faker to win the 2017 World Championship.

Upon completion of the debut goal, Clozer claims he wants to keep appearing in the next match to show off his best. According to him, he had only achieved 50 percent productivity in the match against KT as compared to the rank battles. This player will have the opportunity to fight hard in the match against SANDBOX on August 2.