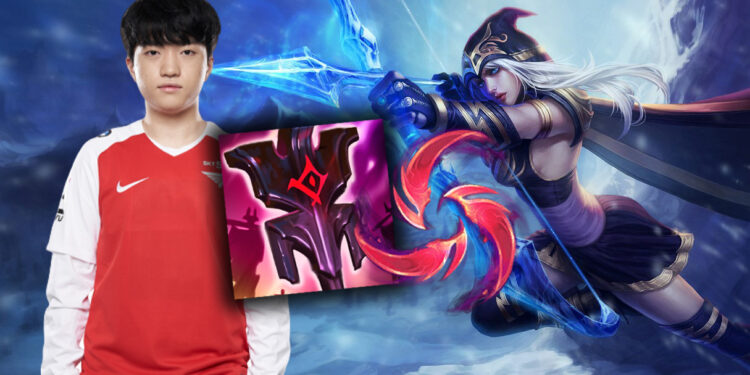 T1 Keria had one of the largest support champion pools in pro play, and he is going to reveal something new up his sleeves

He’s also recently been seen playing unique champions in the support role in solo queue, like Ashe and Zoe support.

He started Zoe support in ranked 10 days ago. The champion was recently buffed in patch 12.8. Despite losing his first two games as Zoe support, he began to win a few games later and now has a 50% win rate on her. Apart from the support item, he builds mostly AP items on the champion. Everfrost will be his first priority as the Mythic item, he then buys Horizon Focus and/or Shadowflame after if the game goes on.

Similarly, the T1 support has been testing with support Ashe. Ashe was once conventional support pick a back while ago with a poke playstyle, but it seems that Keria wants to bring it back.

With Exhaust mostly being his main Summoner Spell and Hail of Blades as his keystone, he then builds Imperial Mandate as his Mythic item and either Manamune or Umbral Glaive as his second item. Items afterward will depend on the situation, but he mostly builds Lethality items.

T1 now has 5 victories and 3 losses in the Rumble Stage, and their next match with Saigon Buffalo is just within minutes now. With playoff participation on the line, it’s doubtful that Keria will do something unexpected in the final few games.