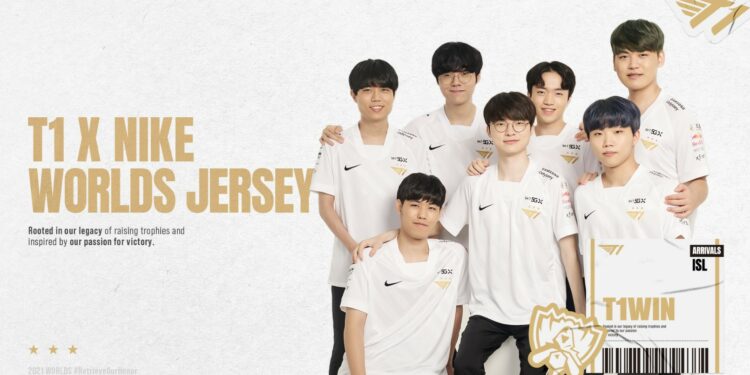 It appears that T1 fans might have to take some time to get use to this Worlds jersey color.

Recently on T1 LoL’s official Twitter account, the team has revealed their new jersey model that the team will wear at the upcoming 2021 World Championship. This is a Nike-sponsored product for the team, created in the colors of the top-tier League of Legends competition, which will begin in Iceland in a few days.

This is also appeared to be the first time that T1 made such changes. For the first time in Worlds history, League’s most iconic team will wear a complete white jersey with a gold emblem on the chest. The sponsors’ names are printed on the sleeves and shoulder pads while the word “SKT 5GX” is affixed just above the logo. In the middle of the word “SKT 5GX” and the T1 logo are 3 stars representing this team’s 3 World Championships.

The team has always been quite familiar with the red-white or white-black jerseys and it has never changed like the forthcoming Worlds, having a prominent color of white.

However, maybe because of the lack of familiarity with the eyes, fans had conflicting feelings about the new jersey. Negative comments and bad review towards the shift yet so little complement. Some fans even said that Nike was “lazy” for virtually bringing the complete design of Rare Atom, changing it slightly, and making it T1’s new shirt.

Of course, many supporters, on the other hand, say they appreciate the new shirt color and hope that a fully new color jersey will be a new feature for them, ushering in a prosperous new generation.

T1 will be placed in a tough group at Worlds 2021 due to the presence of EDward Gaming, the reigning LPL Summer 2021 champion. The fans, on the other hand, are optimistic that the team will perform well and go far in this year’s Worlds.