Worlds 2021: Will DWG KIA be able to get their 2nd Worlds Championship in a row? 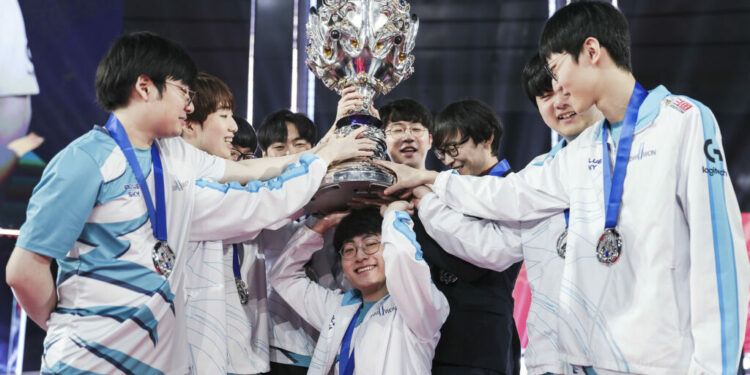 DWG KIA, the former World Champions, are back at Worlds. They dominated the second part of 2020, but the year as a whole was not without its challenges.

Looking back on the trip from the second half of 2020 to the conclusion of the first half of 2021, DK has always stood out among the other LCK teams. With an outstanding performance, they comfortably secured a spot at Worlds 2020 and MSI 2021.

This year Worlds, DWG KIA is looking for their second title. In Group A, they will play against FunPlus Phoenix, Rogue. After all, DWG KIA and FPX are both strong contenders at this year and it will be fascinating to see who will win. Let’s see how has DWG KIA prepare for Worlds!

Regards by many people as the best top laners at Worlds with 6 LCK titles, Khan has to himself an aggressive playstyle and a large pool of champions, especially with Jayce, whom he shinned the most with.

Despite having spent nearly 8 years as a professional player, Khan has yet to win an Worlds. He has also stated that Worlds 2021 will be his final appearance. Will Khan finally win the title he’s been after for his whole career?

When Canyon earned the MVP title in the World Championship Finals in 2020, he solidified his place in the jungle. However, Canyon struggled to adjust to the new jungle meta in the 2021 season.

Yet, from time to time, Canyon gradually regained his form, particularly in the gank jungle meta. Currently, Canyon and ShowMaker are the best duo in League of Legends today.

ShowMaker first joined DAMWON Gaming in 2018 and has since established himself as one of LCK’s best players. ShowMaker was also crowned as the MVP player of LCK Finals just now.

ShowMaker played 18 different champions (including 3 bot lane champions) in the LCK Summer 2021, placing second only to Jeong “Chovy” Ji-hoon in that statistic. The only issue is whether ShowMaker can rise above Faker or not and claimed to himself as the best mid laner.

Although in the summer of 2021, Ghost is the main cause for DK’s poor performance. But he returned with DK in the second half of the season with his original support play.

The best champion Ghost has played in his career is Senna. He has an 85.2% win rate with this “Fasting Senna” meta. Not a super carry, but Ghost still has some pocket options like Draven or Kog’maw or mage champions like Syndra and Ziggs.

As one of League of Legends’ most inventive supporters. BeryL has a thorough understanding of the game. BeryL’s talents may not be the best, but his in-game knowledge and ability to read circumstances are on another level. BeryL was in charge of snowballing the lead after DWG KIA grabbed the lead in the lane regions.