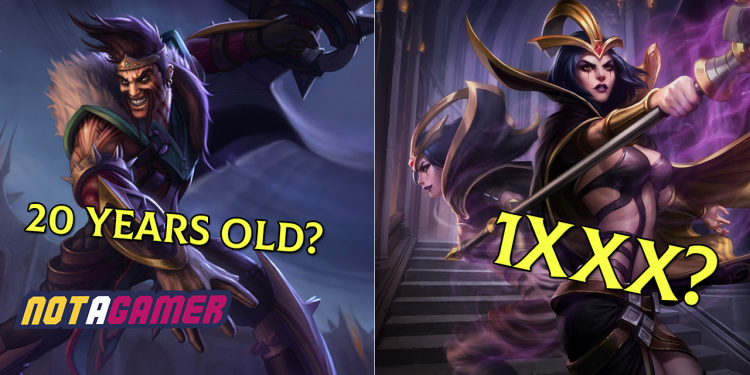 Noxus has long been a mysterious and brutal Empire that hides a lot of legends and is the birthplace of extremely mysterious champions like Leblanc, The Black Rose,…

Because of the mysteries of Noxus’ representative faces, this has made fans fascinated in this region as much as Ionia. So today let’s uncover the secrets and learn about the true age of the champions from the Noxus region!

As one of the rare siblings in League of Legends. Darius, as well as Draven, are extremely one of the famous champions of League of Legends and both are great figures of this Empire. Talking about Darius, although he has a relatively young face, his strength is still very prolific but this guy has gone through many battles, achieved a lot of success and is a very important factor in the Trifarix Council.

In Darius we see a mature and still very energetic but a gray hair shows signs of age. Therefore, Darius will be around 40 years old to fit these above analysis. Meanwhile, when looking at Draven, we can see that Darius’s younger brother possesses a “playboy” style that is the completely opposite with Darius. But because both of them had spent a childhood together, as well as having spent time in the army side by side, Draven’s age would not be too far from his brother. Therefore, 35 years old will be a suitable figure for this general.

Predicting in arbitration and terrifying on the battlefield, Katarina is a Noxian assassin at highest level. The eldest daughter of the legendary Du Couteau, she is the elder sister of Cassiopeia – the youngest daughter lost herself in search of a power that she did not belong to.

However, unlike the siblings Darius and Draven, Katarina and Cassiopeia have separated from each other to go their own ways at an early age. Katarina followed her father to learn about military tactics as well as pursue the assassination of targets. While Cassiopeia followed her mother to become a beautiful but extremely malignant lady, then joined the Black Rose.

Why should Riot Games concentrate on remaking champions instead of releasing many new ones?

Although both sisters have the same impulsive personality, later on, they both gave themselves their own achievements and became the person that they wanted to be at a relatively young age. So even though both of them have very young faces, but given the time and events they went through, the numbers 25 and 29 will suit for two beautiful girl of the Du Couteau.

As a contemporary assassin as Katarina, Talon is the person whom Du Couteau’s daughter admires. The Blade’s Shadow, Talon is a ruthless assassin who can strike unannounced and escape before someone else can alert. He is famously dangerous on the streets of Noxus, where he is forced to fight, kill, and steal to survive.

Adopted by the renowned Du Couteau family, he carries out all the missions ordered by Du Couteau, assassinates the enemy chiefs, generals, and heroes … as well as any foolish Noxian make his master offensive. He has done a lot of missions and gained too much admiration, but his youthful face as well as being respected and regarded by Katarina as a brother, the friend,… shows that Talon’s age is still very young about 29 years old only

One of the rare villains to recognize the brutal nature of the Noxus Empire and also the only champion connected to Yasuo, when he was the one who accidentally caused Yasuo to be misunderstood and have to hide until later.

Once a swordmaster in the warhosts of Noxus, Riven is an expatriate in a land she previously tried to conquer. She rose through the ranks on the strength of her conviction and brutal efficiency, and was rewarded with a legendary runic blade and a warband of her own. However, on the Ionian front, Riven’s faith in her homeland was tested and ultimately broken. Having severed all ties to the empire, she now seeks to find her place in a shattered world, even as rumors abound that Noxus itself has been reforged…

In terms of age, Riven is mentioned with the enlistment from a young age. In addition to the details after the great battle with Noxus and the accidental murder of Yasuo’s master in the past, Riven is said to be about the same age as Yasuo when both of them lived a life in exile before meeting each other. So both Riven and Yasuo may be young-swordsman with age 31.

Perhaps mentioning Noxus, we can not mention the most important person in the Trifarix Council assembly as well as the most powerful person in this Empire, Swain. Born into a noble family that has existed since the first walls were erected around Noxus, Jericho Swain’s fate is a life full of privileges.

Despite this, Swain is not like the pleasure-enjoying nobility we often see, he went to the battlefield when he was very young and became a general who made a lot of great feats under Darkwill. However, after Swain was betrayed by the Secret Society and the emperor he once admired was fascinated, Swain silently unleashed the hidden power within the perpetual fortress. Afterward, Swain along with the coup allies, took down the Noxus in one night and easily defeated Darkwill with his incredible strength. With a tough political career and his aging appearance, Marshal Swain was 55 years old until now.

As a dead man, Sion is a testament to how brutal the Noxian empire was and despite their success in battle. Once a heroic general who sacrificed heroically during the Demacian period, was still ruled by Jarvan First. Sion was a famous general with many anecdotes about himself.

Most especially, there is a legend that Sion had ripped apart Jarvan First’s ranks as well as being stabbed thousands of swords and arrows but miraculously survived. Despite being enshrined and buried in the most solemn ceremony, Noxus has since weakened from Sion’s death. Half a century later, Sion’s tomb was unearthed and it was the magic of the Black Rose that brought Sion back to the human world.

Currently, by the time Sion returns, Demacia is ruled by the Fourth Jarvan, if an average of a reign of a European king is 30 years, Sion is now over 100 years old is absolutely possible. So the age of Sion will be around 140 years old is extremely reasonable.

Considered a very dangerous woman, Leblanc was the first character to appear to lay the foundations for the Noxian empire as well as the person who laid the foundation for the Black Rose cult.

Manipulated everything at Noxus from the very beginning and was mentioned when appearing alongside with Mordekaiser. Leblanc thanks to her dark power has lived for generations and is almost present at every important event of Noxus. Because of a very mysterious character and appeared from the first day until now, Leblanc is almost one of the oldest living generals when she is now more than 1,000 years old and is considered one of the immortal champions in League of Legends.

Just like the case of Leblanc, Vladimir – a demon bloodthirsty is also one of the generals considered immortal when appearing a long time ago. As a sinister, Vladimir has influenced the affairs of Noxus right from the early days of the empire.

Besides his ability to prolong life unnaturally, his expertise in blood “art” allowed him to control other people’s minds and bodies as easily as his own. In the past, Vladimir has also been mentioned as a bloodthirsty demon raging on the east coast of Valoran. In addition, Vladimir along with Leblanc are the co-founders of the Black Rose.

But contrary to the mystery of Leblanc, Vladimir is a noisy politician appearing to protest the dominance of the Trifarix Council. With his obvious details, Vladimir is an immortal mortal being but transformed by the dark magic he has learned. Not only he was introduced as a prince who appeared before Mordekaiser but before the Noxian dynasty is founded, so Vladimir will be 1500 years old and up to the present.