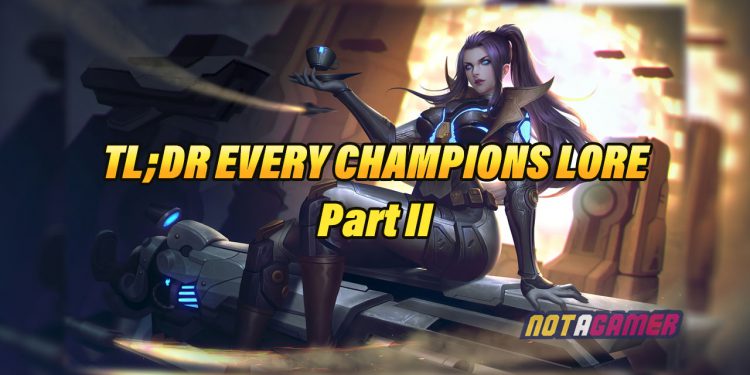 If you already read our previous Champions Lore for Those Who Are Too Lazy to Read [Part 1], here is the next part of this series!

Caitlyn – The Sheriff of Piltover

Sheriff of Piltover and leader of the Wardens, Caitlyn takes down criminals while searching for a person known only as “C”, who is responsible for an attack on her family.

Principal Intelligencer of Clan Ferros, Camille ensures the continued prosperity of her clan as well as Piltover by maintaining the delicate balance between Zaun and Piltover, while also taking down any she deems to be a threat to progress.

A member of the Noxian noble house of Du Couteau, she was transformed into a half-snake monster after a failed expedition to Shurima for hidden artifacts, and serves the Black Rose.

Cho’Gath – The Terror of the Void

A Void-Spawn, Cho’Gath is a almost titanic monster that seeks nothing more than to consume all life around him and continue to grow larger and larger.

Riot Games: Do you need a minimum rank to work at LoL Analysis team?

Corki’s copter was made as an aerial assault vehicle and he was soaring over Valoran with “Screaming Yipsnakes”. He served several tours of duty, and after his retirement, has joined League of Legends to test his mettle against the best the world has to offer.

Darius – The Hand of Noxus

An orphan who rose high within the ranks of the Noxian military, he is now the leader of Trifarian Legion, and serves as the Principle of Might of the Trifarix, the ruling council of Noxus.

Diana – Scorn of the Moon

A member of the Solari faith, she was imbued with the Aspect of the Moon, and has since joined the Lunari.

Dr. Mundo – The Madman of Zaun

A crazed monster who is just barely human, Mundo journeys across Zaun believing himself to eb a doctor, and forces his “operations” on any he comes in contact with.

The brother of Darius, and a egotistical glory seeker, Draven became an executioner, and has turned the affair into a spectacle, only to further blow up his own already inflated ego.

Ekko – The Boy Who Shattered Time

A Zaunite youth, Ekko uses the device on his back to alter time, and has become a protector of fellow youths within Zaun, leading his own gang called the “Lost Children of Zaun.” Ironically, he actually has parents.

A Noxian noble woman, she was scarred by her husband and gained back her beauty after an encounter with a spider-god of the Shadow Isles. She now serves the Black Rose, and regularly sacrifices people to her god in order to maintain her eternal youth and beauty.

A demon who uses a seductive façade to lure people in, she feeds off of their pain and misery, torturing others so she may continue to live.

A pompous Piltovan adventurer, Ezreal explores and studies ancient ruins both out of genuine curiosity and interest, and also to increase his fame. He hopes that his parents will return once he becomes famous enough, even though their most likely dead in a ditch somewhere.

Used to be silly old monster that no one would ever be afraid of. However, Fiddllesticks has returned. He turned into something terrible, more horrifying.

Head of the Demacian noble house of House Laurent, Fiora gained the position after killing her father in a duel when she witnessed him cheating. She now longs for a worthy opponent, her dueling skills are unmatched.

A Yordle, Fizz originally lived alongside an underwater city, a welcomed visitor to it’s people, until they were all killed and he fell into a catatonic state. He has since reawakened and amuses himself by playing pranks on the people of Bilgewater.