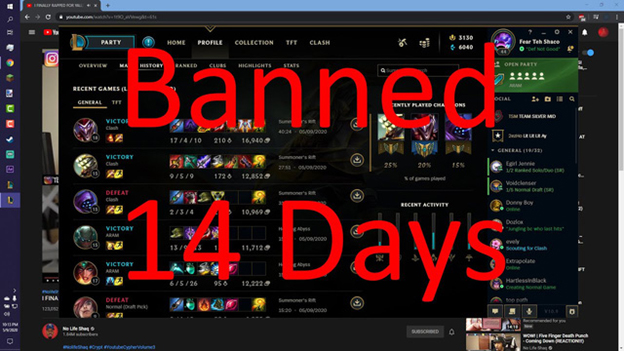 It seems like Riot Games wants to apply force into LoL to decrease the situation of worsen the game.

Much Feed Will Lead to Being Banned 14 Days

These phenomena such as “toxic”, AFK, Feed, break game break in many different ways seems to be more and more popular in LoL.

Although this appeared in game but Riot Games was the most criticized label for not having a penalty system that would control the behavior.

And when Riot Games didn’t handle strictly enough, the game has many players, the game break is understandable.

Because the community complained too much so Riot Games over the past few months have new actions in the problem of up-level their system.

Firstly, they allow gamers to be able to report, block chat right from the ban/pick to prevent unworthy quarrels early.

At the very latest, Riot announced that they would increase the penalty for two behaviors that caused the player to be annoyed most which are “feed” too much and AFK/leave the match.

-We’re launching phase 1 of Int/AFK reductions with tighter detection systems and more penalties (this is the quick pass, lots of future work coming)

-Flex Queue play with no rank restrictions finally coming in 10.15!

In particular, with the “feed”, Riot Games will rely on the KDA of a gamer in many games to decide whether to penalize or not.

They’re tuning our current systems to be more strict in classifying behavior as inting. Riot Games still don’t want to punish players for a bad game but we think there is room between our current thresholds and where a player having a bad game would be.

Specifically our detection will be roughly 25% more aggressive so if it previously required a 0-100 game it now will require a 0-75 game. (It’s more complex than KDA, numbers are intentionally unrealistic to avoid being taken literally.).

To the AFK, Riot Games will upgrade the detection of this behavior to a higher level more than punishing people who deliberately run around and not affect the match.

Penalties: When a player leaves or AFKs without reconnecting, they will receive an automatic loss even if their team won the game.

Hope that with these strong measures of Riot Games, the break game problem and the lack of fair matches will be minimized.