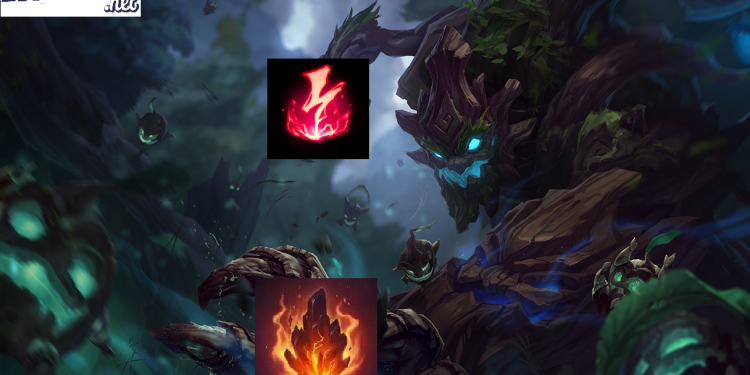 If you are bored with standard LOL playstyle, congratulation you have found the right sanctuary.

Yes, I know. It’s crazy and hard at the same time but this build is wild and please give it a try. Shaco can build up Conqueror stacks and the way it works is that each Shaco W – Jack in the Box give Shaco 2 stacks. As a result, Shaco Top playstyle evolves around baiting your opponent into as many boxes as possible to pop Conqueror easily.

Maokai – The Twisted Treant has been a reliable pick since Sunfire Cape buffed as well as nerfs to other champions. For that reason, Korean players have been bringing Maokai into Jungle and running Electrocute Key Stone. By using Electrocute, Maokai can amplify up his early damage, guarantee early kills in the early game but still remain tanky throughout the match. Snowball plays an extremly important factor altering the winning outcome in League of Legends, getting successful early ganks can build up inevitable snowball momentum. Even though using Electrocute, Maokai still has to build tanky items to maximize this champion’s potential. If you want to add more Ability Power, get Liandry’s Torment and Zhonya’s Hourglass.

The Unbreakable Spear is an extremely annoying mid lane champion with his easy trading in lane skillset. Moreover, Pantheon can coordinate with his jungle to create a lethal gank with his point-and-click stun W – Shield Vault and Q – Comet Spear which deals an additional damage against low HP enemies. By being able to deal an incredible amount of damage, Pantheon already has enough damage to kill squisy target. What he’s lacking is the movement speed to continue chasing them down in lane. By giving him some mobility rather than damage, this problem is solved and he’s open for a lot more viable team comps. He can also be trickier with this key stone, in stead of commiting to all in, he can immediately run away and return.

After the rework, Volibear is a walking Ohmwrecker now. With his ultility skillset, he can easily initiate a small teamfight with stun or slow from his Q – Thundering Smash or E – Sky Splitter. Also using his R – Stormbringer, diving under enemies’s turrets seems easy especially bot lane where lots of markmans lack of mobility, escape capability and the only turret protecting them is… disabled.

Death’s Dance – The Item Everyone Should Get

Death’s Dance was buffed in patch 10.6. It has become one of the strongest defensive items in League of Legends, even better than stats-provided items. Death’s Dance provides incredible healing power and the only downside to it is that you have to deal damage to be healed, but if you are a bruiser, a marksman or an assasin and you are not dealing any damage, well the match may be over for you. Recently, in top tier competitive match between WE and Suning Gaming, SN even built 3 Phantom’s Death and totally crushed WE’s comeback attempt.