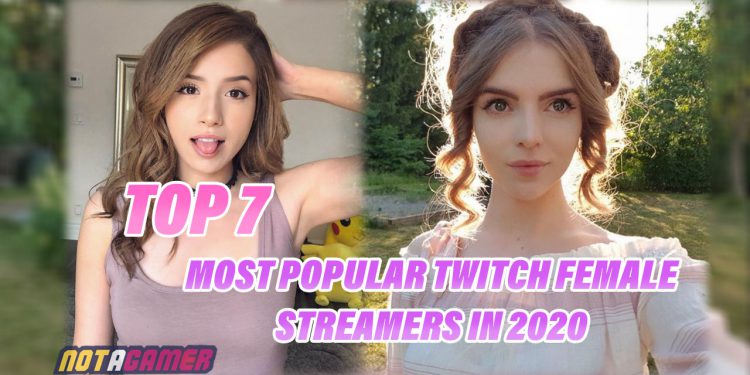 Twitch.tv is one of the biggest live-streaming platforms that every video game streamers known of. Though gaming is often seen as a man’s world and is dominated largely by male influencers in the gaming space, women make up a large portion of the gaming industry as well. In fact, 35-45% of gamers are women, and these women typically play a wide kind of games.

Female Twitch streamers may not see the millions of subscribers that top gaming YouTubers are known for, but Twitch offers streamers a tight-knight community of followers, subscribers, donors, and tippers. There are many Twitch steamers have made Twitch their full-time jobs.

Below is a list of the top 7 female streamers who have the most Followers on Twitch:

KittyPlays is a 28 years old Canadian Fortnite Streamer on Twitch and YouTube. She hosts and produces her own show Playtime with Kitty Plays where she interviews and plays games with celebrities. Before fame, she attended university in Canada and was planning to become a surgeon before switching her degree to business.

Natalia Mogollon is a 32 years old Colombian World of Warcraft streamer on Twitch. She began streaming full-time in 2012. She got ban from Twitch once when she accidentally exposure her chest to the viewers.

Loeya is a 22 years old Swedish Twitch Streamer. Her real name is Liah. She usually play Fortnite and be able to make a living by playing video games on Twitch. Besides, she also play The Sims, Hearthstone and League of Legends.

Lily Ki is a 28 years old American YouTuber and Twitch streamer who makes a variety of content spanning from animations to music on her YouTuber channel. She is a very talented pianist/artist. Some of her videos were featured on League of Legends client.

Besides, Lily also produce piano covers of popular animes, also her own League of Legends parody songs and animated videos.

She is a 27 years old Australian Fortnite star whose real name is Kathleen Belsten. She is a Fortnite content creator and is popularly known as Loserfruit on Twitch. On June 22, 2020, Loserfruit has now become the next Fortnite person to be added to Fortnite, as part of the game’s Icon Series.

She is a popular 26 years old American cosplayer and Twitch Streamer who got banned 3 times for having inappropriate content and accidentally exposing herself on stream. Her real name is Kaitlyn Siragusa. She is known for exposing her body on her stream and on YouTube.

Pokimane is in the top 1 most popular Twitch Streamer at the moment!

Pokimane real name is Imane Anys, better known by her online alias Pokimane. She is a 24 years old Moroccan Canadian Twitch most popular female streamer. She can often be seen on both Youtube and Twitch telling stories, making jokes, and unboxing geek subscription services.