Turrets have been seriously bugged since 12.14, dealing much less damage and affecting even pro games 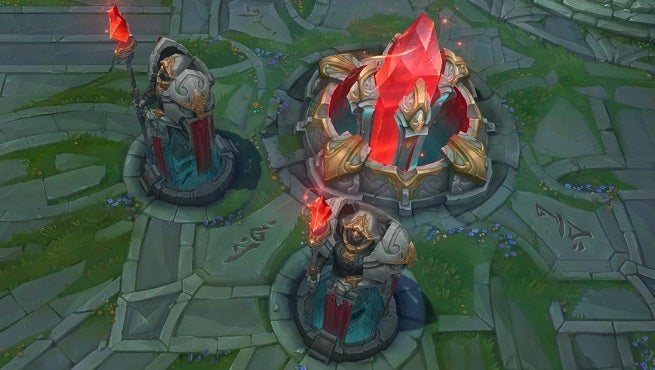 Turrets, also called towers, are heavy fortifications that attack enemy units on sight. Turrets are a core component of League of Legends. They deal damage to enemies and provide vision to their team, allowing them to better control the battlefield. Turrets target one unit at a time and deal heavy damage. Teams must destroy enemy turrets to push their assault into enemy territory.

Turrets have an inventory and can hold items just like champions. One of the items is called Ohmwrecker and allows tower to gain a stacking damage buff for every hit they land on a champion. The buff starts at 40% and can reach a maximum of 120% by the 4th hit.

The mechanics is of course meant to deter and punish tower dives. But the less damage bug makes towers only gain 1 stack of 40% and greatly diminishes their power and purpose. This is a major bug since there are 11 turrets in a League game on each side, and god knows how many games have been played since Patch 12.14 launched last week.

By proxy, there must have been multiple games where the bug has affected the result. And that extends to professional games as well. Here is an example Vandiril brought up: WBG vs FPX

It is uncertain what caused the bug, and Riot has not addressed the issue in Patch 12.15 notes. This could affect the integrity of the entire last week’s pro results and who knows for how much longer.

LoL has been infamously plagued with bugs due to its 2 week patch cycle and extremely outdated client, the most recent one being with the Star Guardian event’s rewards.