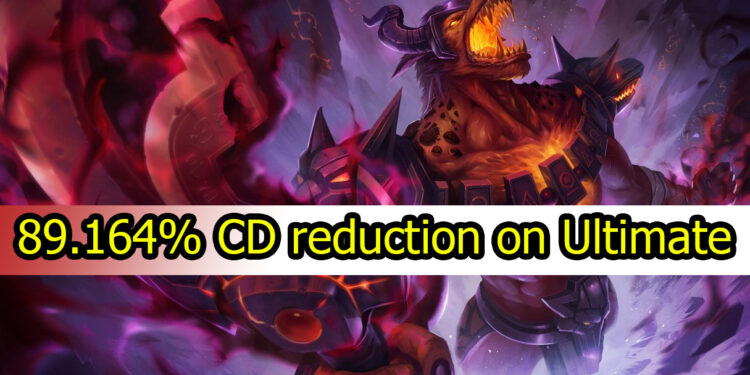 After a while of researching, a Redditor u/Semprosius figured out a way to overcome the URF effect with a 90% cooldown reduction.

“TIL you can have up to 89.164% CD Reduction on your ultimate in a Summoner’s Rift game. This means that you can use you R almost twice as often as in URF.”

To show that this is indeed correct, I tested it in practice tool. Unfortunately, I have 5 Ability Haste less, because I can’t have an Ornn on my team. This means, that I only have 88.99…% CDR. I tested it with Morgana, who has 100s cooldown on level 16 ultimate. In this screenshot, you can see that she has 11.01s cooldown, which confirms that her cooldown is reduced by 88.99%. Proof

URF only gives you 80% cdr (but on all abilities). So Morgana’s R would have a cooldown of 20s.

Looking at the above conditions, we can see that possessing nearly 90% of the ultimate cooldown is extremely difficult, even impossible. The reason is that items that provide a lot of ability haste often have stats that don’t interact with each other. Nobody would buy Cosmic Drive, which increases AP with AD items like Black Cleaver or Navori Quickblade.

Luckily, Riot left the ability haste stats on various item so it would be extremely difficult to stack this stat up too highly. It’s hard to imagine what LoL would be like if a champion had nearly 90% of the ultimate cooldown.