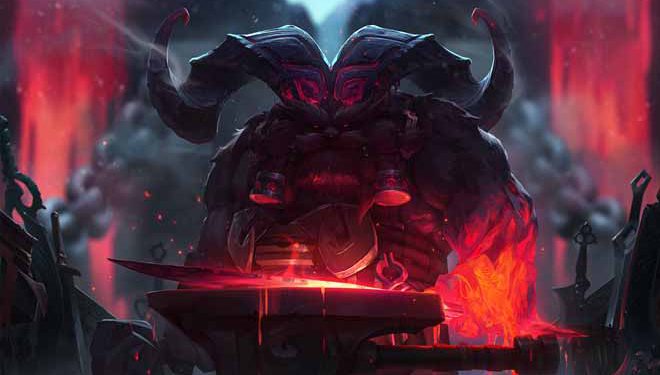 Since its release in 2009, League of Legends has not only been attractive for its easy-to-access gameplay, extremely eye-catching character design, but also for its captivating storyline, an epic history for both. game title. But it doesn’t just stop at creating the plot, Riot Games also links everything together to create unity, while renewing the biographies of each champion, creating a great story of the gods shaped the world.

One of those gods is Ornn. So what did this god create? What are his legacies? Summarize all of these details in the following article.

Ornn was born as a demigod, a great entity of the Freljord region. Like other brute-looking siblings, Ornn, in the beginning, was a frenzy. However, nothing compares to the unprecedented strength of a god, requiring him to find those who are more worthy to fight.

That is the ground. As he struggled with the Freljord’s ground, his thrusts bounced up mountains from the plains, creating protrusions, and smashed into deep valleys. As a result, he accidentally changed the topography of this land and created the Freljord as we see it today – a land with a more rugged terrain than other areas in Runeterra.

Not stopping there, Ornn is also the direct cause that turned the arid tundra like the Freljord into a snowy land, not Anivia. When Anivia played a prank that caused Ornn to accidentally burn down his magnificent castle, he was determined to build a house that could not be burned.

Along with his tools, he smashed and honed piles of ore until a towering black mountain appeared, with a huge forge inside powered by flames originating deep within the earth. However, the volcano was too hot for Ornn to live comfortably, and so he dug a ditch that led water from the sea into the mountain, in order to cool his home.

The result of this action was to make the dense clouds of steam rise so that the eternal blue sky was dotted with grey clouds. As these floating clumps gathered and cooled, they became heavier, heavier and then snowed out. And so on, the snow had fallen for hundreds of years, turning the whole Freljord into a cold place.

2. The ancestor of forging

A long time ago, Ornn had met with 3 ancient Freljord leaders, known as the 3 sisters Avarosa, Serylda and Lissandra. They asked him to dig the deepest ditch. With his shovel, he succeeded and turned it into a famous place, known as the Howling Abyss.

Years later, the Three Sisters returned and begged Ornn to teach them to make a bridge to cross the ditch. Although the smell of magic emanating from Lissandra made the difficult old god disagree, he was lured by the glittering stars in their hands – something that only he could forge.

Therefore, he was reluctant to build a bridge that cannot be destroyed, lasting with time. But shortly after, Lissandra used the spell to cast magic on the bridge, aiming to turn it into a brace to seal the monsters below the abyss.

As the forefather of forging, Ornn created countless famous weapons and was associated with modern-day champions, though he did not know these things were so great for the human world. come on. Perhaps the only thing he raved about was the hammer in his hand – the tool forged by the glittering star metal he had received in the past.

Besides, although not officially confirmed, his biography shows that Ornn is the creator of the weapons of some champions in League of Legends.

Thus, although mysterious, Ornn has left his countless legacies to the posterity. So, maybe one day in the future, we can see another champion holding the weapon made by Ornn?

Riot: The upcoming new champion will be more balanced