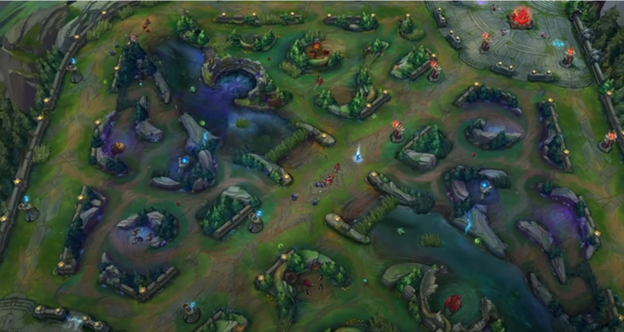 League of Legends: Wild Rift will revoke all the Lane divide that many players know at PC version and have a new devide.

Despite experiencing League of Legends: Wild Rift, players won’t be able to get access to game this time because the accounts using VPN will be disable due to Riot’s campaign.

However, these days, together with Riot Games’ announce, players can see some changes of League of Legends: Wild Rift compared to PC.

Secondly, it’s also important, that is League of Legends: Wild Rift will revoke lane divide like PC. It means there’s no more Top Lane or Bot lane and they’ll be Dragon Lane and Baron Lane.

This explains for that to deal with both teams’ maps on Mobile. Therefore, champion’s position on each lane will be changed. Additionally, Baron Lane will be for Tank or Juggernaut.

Many players will recognize that this way of lane divide is the same as some MOBA games on Mobile and AoV is an example.

LPL Player Forgot to Bring Smite When Going to Jungle

In Arena of Valor or Arena of Glory, tanker champions or Juggernaut will usually start at Dark Slayer Lane while Dragon Lane is for ADC and support.

This divide is said to be conformed with MOBA games on Mobile because they have to build a flexible changing map.

Therefore, League of Legends: Wild Rift will have to have change to get along with Mobile. This way of divide may be strange to LoL PC player but it’s familiar to MOBA Mobile players.

However, applying 100% exactly from PC to Mobile is impossible. Two foundation with too much differences so Riot has to change to make the least difference as possible and to assure Wild Rift’s operation.