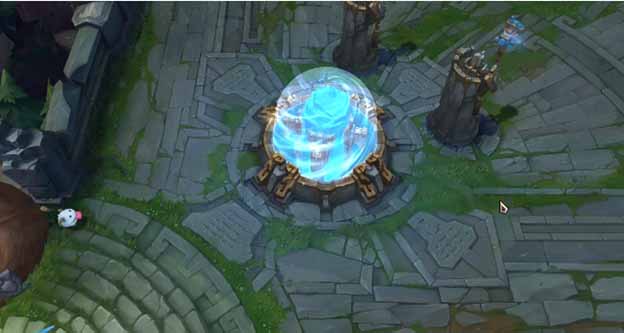 Another strange phenomenon appeared in League of Legends, namely the Nexus, and many thought it was a sign of the new Volibear.

Nexus is the most important construction in League of Legends, winning the game is a game that determines which side breaks the building first. Even as described on LoLpedia, the Nexus possesses a huge crystal block that is the source of energy to produce minions, an important force to help players win the game…

During the development period of League of Legends, the mechanism of the Nexus has not changed too much, maybe it is just an upgrade of the appearance, but a few hours ago when the PBE server was updated, a strange phenomenon appeared.

As shown in the video above, at the beginning of the match a mysterious white layer will cover the Nexus, more precisely the crystal block inside, it seems to have the effect of protecting this building. The important thing here is why did it appear and for what purpose? Gamers have made their speculations, mostly related to the “new” Volibear or updated images for the Nexus.

Peanut being sexually harassed by a mysterious man on social media

Riot is about to introduce an anti-backdoor mechanism: Volibear’s passive will give the Main House the same effect as Nunu’s ultimate, if the opponent attacks it will cause a snow blast.

I want to believe this is a visual upgrade for Nexus. I quite like the visual similarity to explain why you can’t attack Nexus without breaking the guard before.

Anti-backdoor is a mechanism that appears from DotA Allstar and still exists to this day in DOTA2, simply understand that it helps protect your towers and structures against the attack of enemy champions without minions to fight together.

When League of Legends was born, Riot Games did not include this in their game to simplify what gamers need to know, which is the criterion of this game.

However, with the appearance of the visual effects mentioned above, it is likely that this is a signal for a major change related to the mechanism of the work of this work, maybe this is the next easter eggs about the Volibear’s appearance?