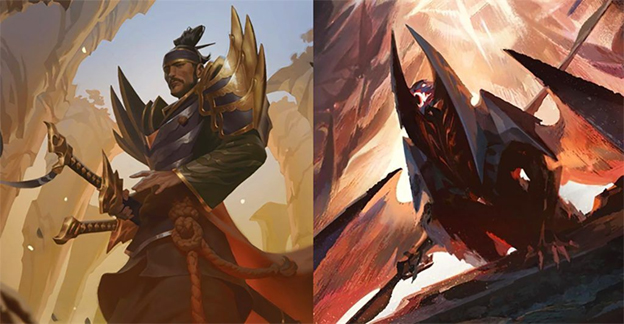 Not long ago, the Brazilian streamer “Streamie” – who also revealed a series of information about Lillia announced that she had witnessed the image of the next champion and that she was surely Yone – Yasuo’s older brother.

Many sources shows Streamie are among those very close to the design and development team of Riot Games. That’s why she knows too much about Lillia. Thereby, the information that Yone is the 150th champion has been more believable.

After guess about Yone – Yasuo’s brother appearance in Summoner Rift was finally confirmed as a series of photos leaked on Spirit Blossom Yasuo Skin and the interaction dialogue of Spirit Blossom Thresh when clashing with Yone in Patch 10.15 shared on the forums.

The first image of Yone was announced yesterday and was identified as the skin, which is properly the Spirit Blossom line by many details similar to Yasuo.

Although there is no mask, Yone in the image is leaked – as well as the shape of the game Legends of Runeterra – also uses 2 swords as weapon, and has youthful, more romantic appearance than his older brother and father.

Gamer Was Convicted of Racism for Using Captain Volibear Skin

In addition, the interactive dialogue when Spirit Blossom Thresh first faced Yone installed in the audio file of the new version is an extremely sure affirmation for the first revival of LoL.

“Yone, the eldest son overshadowed by his younger brother. How could you possibly rest in peace?”

With a little reveal enough to be sure of appearing in the TFT in Patch 10.15, Yone remained a great mystery when his appearance would change a lot of detail in Universe of League of Legends, especially Yasuo’s biography when Yasuo would have the opportunity to unmute himself and no longer be lonely.

Besides, fans are also curious about why Yone was revived. What does his revival mean?

Apparently, the presence of Yone brings a lot of freshness to the LoL and directly influences Yasuo. And it is so exciting to be able to meet his brother – someone who can tame Yasuo become an adult and mature man.