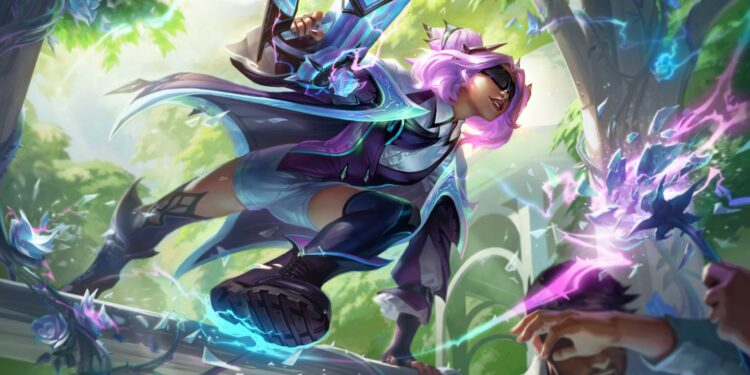 Zeri, the most recent League of Legends champion to arrive on Summoner’s Rift, is an AD carry that uses speed and electricity to punish her opponents.

“headstrong, spirited young woman from Zaun’s working-class” is what people describe her in her official biography, Zeri, a resident of the deep, dark, and dreary undercity featured in Netflix’s Arcane. She is also similar to Valorant recent new agent, Neon.

“We wanted to create a kinetic marksman who’s always on the move, pulsing with sparky determination. A champ who plays the game at a machine-gun pace and brings the feeling of a shooter game to the roster.

Here’s everything we know about the upcoming League of Legends champion, including her release date, skills, and how they appear

Zeri: The Spark of Zaun abilities

Zeri gains Move Speed whenever she receives a shield. When she damages an enemy shield she absorbs its energy, shielding herself.

Passive: Zeri’s basic attack deals magic damage, scales with AP, and is treated as an ability. Moving and casting Burst Fire stores up energy in Zeri’s Sparkpack. When fully charged, her next basic attack will slow and deal bonus damage.

Active: Burst Fire shoots a burst of 7 rounds that deal physical damage to the first enemy hit. Burst Fire scales with AD and is treated like an attack, with the first round applying on-hit effects. Its cooldown matches Zeri’s basic attack timer.

Zeri fires an electric pulse that slows and damages the first enemy hit. If the pulse hits a wall it fires a long range laser from the point of impact.

Zeri dashes a short distance and energizes her next 3 casts of Burst Fire, causing them to pierce through enemies. She will vault over or grind along any terrain she dashes into, depending on the angle. Hitting a champion with an attack or ability reduces Spark Surge’s cooldown.

Zeri discharges a nova of electricity, damaging nearby enemies, and overcharges herself for a moderate duration. While overcharged, Zeri gains increased damage, Attack Speed, and Move Speed. Attacking enemy champions refreshes the overcharge duration and adds another stack of Move Speed. While overcharged, Burst Fire’s damage concentrates into a faster triple shot that chains lightning between enemies.

According to lead champion producer Ryan ‘Reav3’ Mireles, the new champion was initially scheduled for a late 2021 release to coincide with Arcane’s debut event, but “production adjustments” have pushed that date back.

Zeri will be available on Summoner’s Rift alongside League of Legends patch 12.2, which will be released on January 20.