Why Zeri players are building TriForce, Cleaver, and Hydra 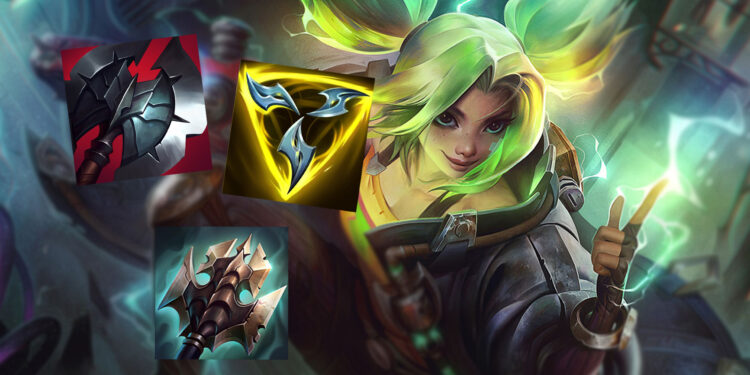 Following the official debut of patch 12.2, the most talked-about topic was undoubtedly the new champion Zeri. Over the course of her first weekend, Zeri’s growth has been swift and wild, with players scrambling to figure out how to effectively use the 158th champion’s unique kit.

Many have tried with various sorts of up with this champion because of a variety of mobility, skills, and flexible gameplay. Professional players, in particular, have chosen a unique build for Zeri that combines Trinity Force, Runaan’s Hurricane, Black Cleaver, and Titanic Hydra. But, given that just one of those things is designed for marksmen, why is this a strong build for her?

Since her main damage is a medium-range straight line skillshot, making her range shorter than it appears when her enemies are constantly trying to approach her.  As a result, she won’t get nearly as much use out of building items as a regular ADC.

The Trinity Force, Runaan’s Hurricane, and Titanic Hydra trifecta allow Zeri to deal a lot of area of effect damage, and it synergizes amazingly well with her ultimate, which gives her more AOE and movement speed, along with making her a little tankier when she gets up close.

For Zeri, the Triforce is a fantastic item. It provides her with AD, attack speed, movement speed, and the ability haste that she needs. In addition, Zeri’s basic AD is increased by 30% in a battle when she uses Trinity Force’s passive, which grants her movement speed on every strike she makes.

But it doesn’t end there.  When players add a Runaan’s Hurricane, they gain not just some attack speed, but also an extra 7% movement speed. The two bolts that Hurricane provides for basic attacks are the genuine deal. These bolts inflict 40% of her physical damage to surrounding targets, and they benefit from Triforce’s enhanced base AD as well.

Sadly, the recent micropatch nerf towards Zeri deleted her ultimate interaction with Hurricane, making the chain lightning no longer an on-hit effect. Still, Hurricane is one extremely strong item on her when combine with other items like Titanic Hydra.

Those two bolts also work extremely well with Titanic Hydra, which adds massive explosions behind her autos. Those explosions inflict a significant amount of damage on any unit in the area of her target. The first Titanic Cone explodes as her auto strikes, and two bolts fly. When the bolts strike, two additional cones form, inflicting three instances to the distant enemy.

It’s worth noting that if you have Black Cleaver, 1 Q can immediately trigger all 6 continuous armor-piercing stacks from this item. Of course, the armor penetration index isn’t suited for Zeri, but the Black Cleaver’s ability to reduce armor straight from the target is a different thing. Because of the interaction, it will assist Zeri and her teammates in defeating their opponents, especially tanky ones easier.

All in all, Zeri is extremely strong at the moment as she is having the highest win rate among all the marksmen in the game, according to OP.GG. The key issue is whether Riot Games will continue to let Zeri use the build or whether some of the items in her kit will be changed.