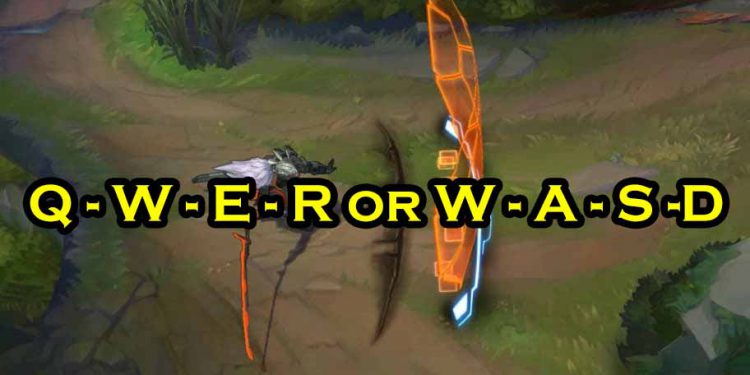 The idea that all League of Legends players uses the default skill key is QWER, there are still many ‘mutants’ with different settings…An LoL player is called an alien because he doesn’t use QWER

The shortcut to use the skill is something that every LoL player uses and at the default settings, the 4 skills will be Q – W – E – R. In turn, it will even be standardized to the point when prompted. When it comes to Lee Sin’s Q or Yasuo’s W, everyone immediately remembers what it is and doesn’t need a specific description.

If Flash can argue for a D or F button, it is very rare to talk about how skill keys are, simply 4 QWER keys are contiguous on the keyboard, they are the default setting. Okay, and very few people change this. So when a guy revealed that his girlfriend didn’t put skills in QWER but WASD, the troll community was an alien, dark witch.

While everyone is discussing about if flash should be on F or D, meanwhile my girlfriend is playing with “WASD”

While playing aram`s with my gf, we talked about the whole flash on f or d discussion and she explained to me, that she is playing with “WASD”.

I was kinda shocked because I though everyone is playing with “QWER” and may change trinket or item keys.

Afterwards I asked her for her full hotkeys she is using:

TL:DR: Flash should be on E, because your gf is always right.

We have two. First problems is that she uses wasd. The second problem is that she does it in a weird way. I have friend who does wasd too, but I’d be lying if I didn’t say it was clever. His basic abilities are awd since those are where your fingers usually lie when playing games with wasd, then s is it since you don’t use it as much, then q and e summoner spells. Her way is insane

League of Legends: You will be called an alien if you do not use Flash with D or F

While the majority of the community joked or were surprised at the way she organized this keyboard shortcut, a few people showed their support and shared their equally strange settings.

In the meantime make sure she stays away from any form of changeable hotkeys.

Do it before it’s too late I’ve had my friend go into asylum due to this he’s still recovering but he’s mentally broken after realizing what he has done.

“WDAS” instead of “WASD” here, You’re not alone summoner.

(Q) is (D) for my first Summoner spell (always flash unless I take TP/Flash, in that case TP would go here)

(E) is (F) for my second Summoner spell

It is true that mutants in the world are also very many, even the installation of shortcut keys there are many new and strange types that we have never thought of. How about you? Do you have any special shortcut settings? Please share in the comments section.