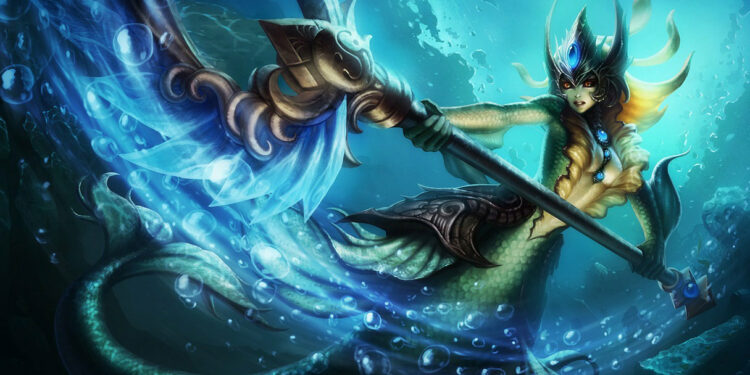 Riot Games has promised the VFX update for Nami will be coming soon, but some players don’t actually expect it very much

While fans were excited that the support champion, Nami, was receiving some love for their visual, enchanter mains have noted one specific modification that they dislike.

Riot has now revealed that Nami, alongside Twisted Fate, will be the next 2 champions to receive a significant visual overhaul as part of Riot Games’ ongoing endeavor to increase visual clarity on League of Legends.

The update, which was released on the official LeaguePBE subreddit on May 10, improve the effects of all of her water-based and splashing spells significantly.

The most visible change for Nami is the animation of her ultimate, Tidal Wave, which is now a much deeper shade of blue. Her W ability, Ebb and Flow, also has a more cartoonish and immense water effect.

While the VFX tends to update the champion, the visual of the splashy water on her Q feels a touch wrong, which many players believe is an indirect nerf to her ability.

Aqua Prison (Q) already has a long cast time, making it tough to land and hit the opponents. Nami players considered the original animation as a more advantageous version, nonetheless, the visual is a little old, but it was harder to predict where it would land

They feel that with an obvious landing point, opposition players will be able to avoid it far more easily, making her Q seems pretty much useless now.

The modifications are still in effect, and Riot still has the opportunity to please fans’ misgivings about the new Q graphics on her base skin. These Nami VFX changes are expected to be released on live servers with patch 12.10 on May 25. Twisted Fate is also expected to receive VFX updates on the same day as well.