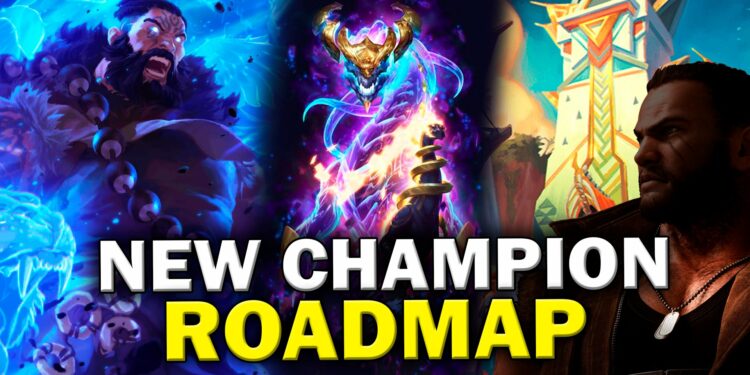 As announced by Reav3, League of Legends players are getting a new video of new champion roadmap next month.

Then, lately, BidBadBear – a famous leaker from Twitter shared a new video summarizing what would it be in the new champion roadmap.

As he mentioned, his information is not 100% accurate, but he gave us a mix of leaks and theories for things that are coming.

First, Udyr is known that he is coming before the roadmap. As the result, he should arrive on PBE very soon as if nothing wrong happens. He is expected to come to League of Legends PBE in patch 12.15 (confirmed by Reav3).

After Urdy, there would come a new tank on top lane, who is from Shurima referred to as “the Pride of Nazumah”.

This champion will be a high-skill top lane tank from a brand new subregion, Shurima. With colorful new art depicting an Aztec and Central American-inspired lush settlement on a waterfall, this appears to be Nazumah.

Little else is known about this champion, but even the regional art is a striking departure from Shurima’s general aesthetic. This new champion will likely come with a flashy, colorful kit that incentivizes aggressive engages.

BigBadBear also mentioned that this new champion is meant to look like a big muscled black guy. This make us related to Doomfist from Overwatch, who is super tanky and have flashy abilities. Though, his skin is still unknown.

After that, it is time for Aurelion Sol and his completely new kit. The old-ancient League of Legends champion Aurelion Sol is finally getting substantial improvements, including the new CGU, according to the Riot Games dev team. As for his arrive, we are not sure but he is expected to come at the early of 2023.

Finally, Riot will start teasing next year champions. One that is very expected by players is an already announced monster type champion (actual monster, not humanoid or transformer). He/she is expected to arrive at the early of 2023 (after Aurelion Sol), who should be an Assassin Mid Laner.

Afterall, what is coming in 2023 is still in the mist, maybe a Void Event or Targon Event. Or maybe some update related to the jungle city of Ixaocan (where Qiyana came from), which is still lack of information about her lore.