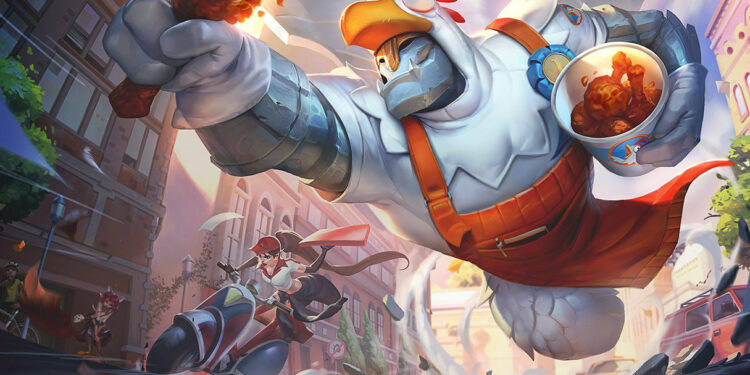 Riot has announced the new Worlds 2022 Chroma skin for Birdio

With all of the additional material comes a very unexpected chroma, the Worlds 2022 Birdio chroma. The Birdio skin for Galio, along with Pizza Delivery Sivir, was launched nearly four years ago.

This skin was an April Fools skin in which Galio is shown dressed as a chicken and delivering fried chicken. He could also be seen flying at a high pace as if he was late for delivery.

The skin has grown in popularity among fans throughout the years. Despite its reputation, a chroma for a four-year-old skin is relatively unusual. Many people believe it has anything to do with a possible KFC sponsorship.

Whatever the case may be, we’re still be getting a nice, though amusing, chroma for a meme skin.

The Worlds 2022 Birdio Chroma will have the same deep blue and gold color scheme as the Worlds 2022 Azir skin. The chroma will also include a new icon for players to acquire.

Because the Birdio Chroma for Worlds 2022 will be an event-exclusive chroma, it will only be available for a short time. The Birdio Chroma will cost 300 event tokens and will include the icon as well.

Birdio Chroma from Worlds 2022 is presently being tested on the PBE. And the full improvements should be available on live servers with League of Legends patch 12.19, which is slated for October 5.