Renata’s ultimate can make enemies secure Jungle camps for her 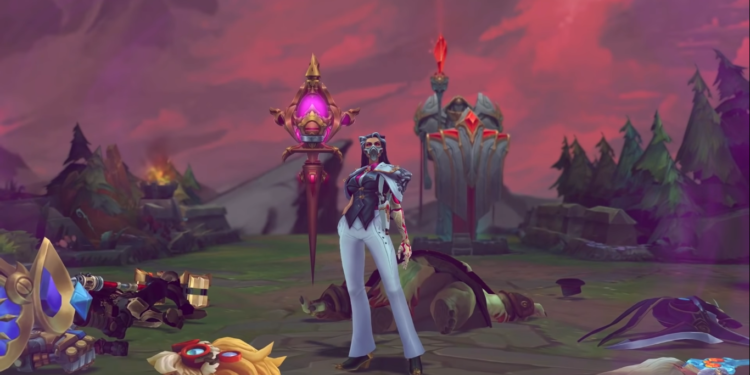 One ult from Renata can turn the whole game around

Riot Games revealed the new enchanter support, Renata, on February 1st, and it appears that fans are presently having a good time with her on the PBE.

Renata’s kit, on the other hand, looks to be capable of more than just normal when players have the first glance at it. According to Riot, her R: Hostile Takeover can cause enemies to go Berserk, increasing their Attack Speed and forcing them to basic-attack anything around them. Berserk enemies prioritize attacking their own allies, then neutral units, then Renata’s team and herself.

Her ability to enhance teammates and turn enemies against each other makes her one of the most terrifying characters even before the game is released. Winning team fights will become much simpler if she can force the massively fed opponent ADC to attack the enemy.

With the new state coming to the game, fans have started testing out, and apparently, Renata is able to make the opponents to even acquire objectives for her, that includes barons, dragons…

It’s unclear whether this was originally intended or whether it was a bug. Her ult, on the other hand, is a completely broken skill that can completely change the tides of a game. This ability, in reality, will be a nightmare in both solo queue and professional tournaments. Renata’s ability to steal jungle objectives by utilizing the opponent jungler is one of the most overtuned in the game right now.

If the opposing jungler is killing the red/blue buff or securing any important objective and is hit by Renata’s ultimate, she will secure it instead of the enemy. For instance, Renata can easily perform her ultimate in the dragon or baron pit, and the dragon is killed without a smite, granting her team the buff.

The only way to counteract this ability is to use smite on time. This is crucial to keep in mind since it makes smite much more useful when there is a Renata on the other team.

Although this is a nice part of her kit, it may cause a lot of irritation for gamers. Players can expect her to hit live along with patch 12.4 to see if she is really broken or not.