Riot Games shutting down a Fan-made Game of LoL after threatening the Creators? 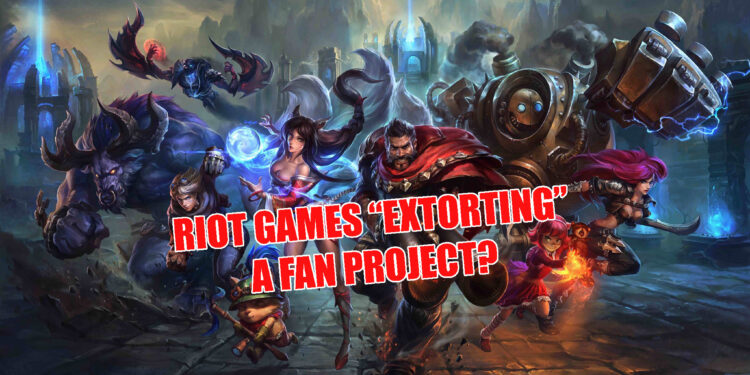 The League of Legends group was enraged earlier this week when Riot Games shut down a fan-driven League of Legends initiative. While shutdown notices are nothing new, how a Riot representative approached communication with the “Chronoshift” project caused widespread discord.

For those of you who don’t know, Chronoshift is/was a fan-made game based on League of Legends created and developed by a group of LoL fans. Chronoshift, “legacy server” that would let players travel back to a decade-old version of the ever-evolving League of Legends.

A so-called Zed, a member of Riot Games’ security department wrote to a Chronoshift developer that Riot Games’ “isn’t super thrilled about your project unfortunately and is looking for a way to come to a mutually acceptable end to it”. Zed demanded that the developers hand over Chronoshift’s source code to Riot, as well as “all identifiable information” they shared with a specific developer. Zed then made the stakes of the situation clear: “Give me what I’m looking for and we won’t sue” with that, the creator said back “Refuse and we will.”

On Reddit, Chronoshift’s developers said Riot Games had attempted to “extort” them despite the team’s efforts: “We never asked for even as much a donation during all of this time, paying all of the expenses out of our pockets”. A ChronoShift’s developer also stated: “Chronoshift has not interacted with the live game, or live game accounts, in any way, shape or form. Chronoshift was never going to go past a patch in early season 2, and was not designed to compete with the live game”.

Riot Games’ letter requested that Chronoshift’s progress be halted, the game’s server be shut down completely, and all promotion and advertising for the project be removed from platforms like Twitter, YouTube, and Facebook. It also echoed Zed’s demand for the source code for Chronoshift.

Although the takedown may not have come as a surprise, there must be professionalism when dealing with this sort of correspondence concerning of “Riot Zed” threatening the creators.

And as for the fan-made project, this fan project seems to have come to an end. This is quite a shame because legacy servers are a fantastic way to keep the crowd involved and longtime fans active in a franchise.