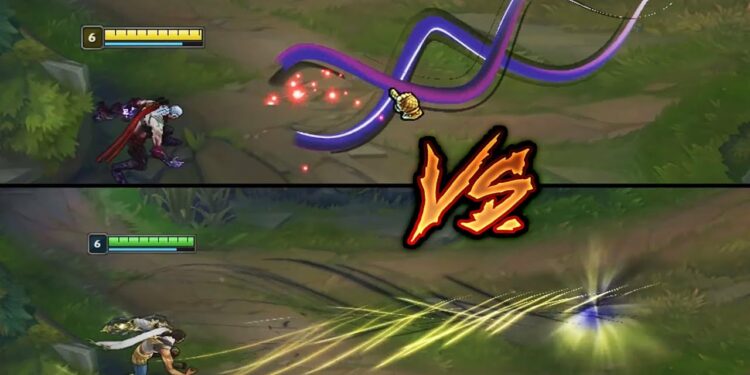 Skins are only meant to make you more fabulous in-game, but it’s not the truth for some. Even though these skins only give you slight advantages, who knows it might alter the whole match’s fate?

Ashe’s legendary skin – Project Ashe has a much smaller ultimate – Enchanted Crystal Arrow in size, making it harder to dodge. Despite being smaller, the hitbox is of course the same as other skins. If her enemies don’t pay enough attention, they might get caught by the arrow.

Varus’s Ultimate – Chain of Corruption is a crucial skill in teamfight. It becomes lighter and transparence making it even harder to notice, not to mention dodge.

His Ultimate – Explosive Cask is similar to Varus’s Ultimate, it has a greyish color scheme that makes it nearly blend in with the environment. The moment you noticed it, you had already been hit. In a big teamfight, it’s really hard to keep track of whether Gragas had used it or not.

Her Ultimate – Spirit Rush’s particle effects have the same color as her E – Charm. A lot of players even panic Flash before Ahri actually casts her E to finish them off.

Her second Q – Orb of Deception and W – Fox-Fire all changes to pink, which creates even more confusion to dodge her Charm.

If you own this Legacy skin, congratulation, you have even more advantages than the other 2 skins we mentioned above. On higher elo rank, players will know how to distinguish which is her Charm. Instead of changing colors, her Q has a clear distinct center but the outer edges of the Orb are darker and almost transparence.

Yes, this skin is banned in competitive play even after receiving the visual updates. Have you ever found yourself snared even when you are out of her Q?

When you spend tons of money for an Ultimate Skin, you should receive equal buffs right? Not only it’s hard to notice, but her Q also seems to travel much slower than other skins. After transforming, a few forms make it even more translucent and even changes the color of her Q.

Keep track of Diana’s Passive let you know when she has a burst, AOE auto-attack. She only glows when her Passive is on, but since Infernal Diana has been already glowing, will you be able to see the differences?

TF’s Q and E both lose some clarity, making him easier to poke safely in lane. When his E is activated, the blue tint circle will appear before cards start to flowing around him.

Tracking your “balls” is exceptionally important for Aurelion Sol to deal damage. This skin helps new players out a lot by making these “balls” brighter and bigger.

Kha’Zix relies heavily on finding the isolated targets and then pick them out. Normally, the only notification for an isolated target is a dark purple indicator, Mecha Kha’Zix’s Circle is much more noticeable and provide clarity for Kha’zix user.

All the images listed here are mostly from Channel SkinSpotlights. Check them out, they always stay up-to-date with every skins Riot releases.

Check out few more news from us:

Top broken Korean builds you should really try in Patch 10.15.

Interested in how to run Lillia? We got you covered.

Do you know Yone Ability was revealed yesterday?