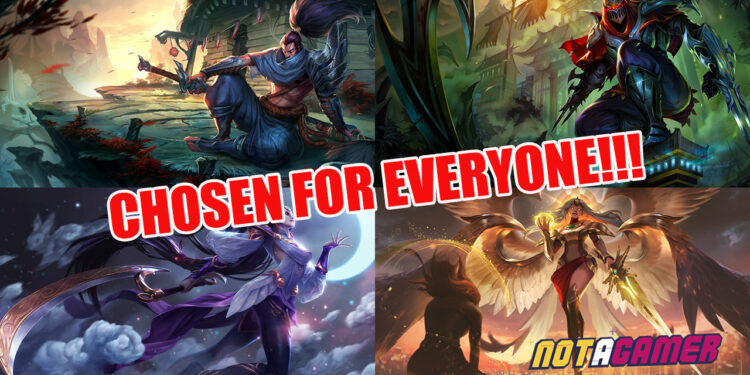 The “Chosen” system in Teamfight Tactics is going to be adjusted in the upcoming patch 11.4…

Since mid-set updates were updated, the “Chosen” system of TFT has seemed to have many problems. Basically, the number of bad Tier 1 or 2 Chosen units is so huge that players just have a few nice options like Diana, Yasuo, Fiora, or Zed. If those units don’t appear early, you will have to suffer from a tough period of time until the shop gives you a strong Chosen unit.

This leads to a serious problem that many players prefer units, comps, or playstyles that don’t depend on Chosen units in order to improve their elo much more easily. Executioner with the duo of Kayle and Xayah is such an obvious example for TFT these days as its carry units still can deal a huge amount of damage without Chosen effect. As a result, the importance of Chosen units, especially low-cost ones, is going down severely.

So as to solve this problem, Riot Games is testing out some enormous changes which are said to completely change our current meta. Riot Mortdog – the Lead Designer of TFT, announced those on Twitter yesterday.

So, exactly, what are “big changes” that Mortdog was talking about? On live servers, if you ignore a Chosen unit, the shop won’t definitely give you another one in your next re-rolls. However, on PBE server, in which Riot is testing out their updates, if you don’t buy a Chosen unit, your next re-rolls will always give you another one! Briefly, you will be able to choose your Chosen unit as long as you invest in re-rolling.

Besides, the Chosen rates in every level is also going to be adjusted to fit in those changes as if former rates remain unchanged (40% of 2-cost Chosen units at level 4 as an example), having a Chosen Zed early will become too easy. Specifically, our new Chosen rates will be:

Those mentioned changes from Riot will help players to own the Chosen unit they want without difficulties and build their comps more efficiently. Moreover, the importance of 1 and 2-cost Chosen units will be improved a lot. If you are too unlucky, you should level up faster than other players to own necessary 3 or 4-cost Chosen units. If those changes are officially applied on live servers in the next 2 weeks, they will certainly change the meta of TFT!