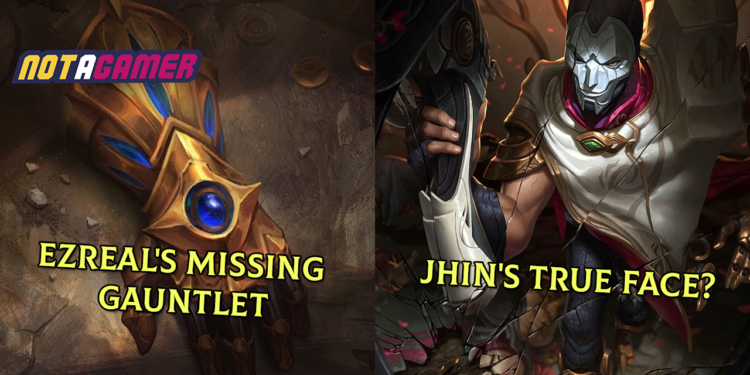 There are a few mysteries that the League of Legends community still wasn’t able to find out till this day. Part 2 is finally on air today, check it out.

Jhin’s true face and his state after fighting Camille

One of the most attention-grabbed champions in League of Legends – Jhin. Since released, Jhin has been well-known for such a deadly, but artistic debut. His identity is a cold-blood killer, the main reason behind the fallen relationship between Shen and Zed. He is favored by lots of players for both his plot and his hidden face. From time to time, we had had a chance to witness a part of Shen and Zed’s face, but Jhin’s face or even his hair is still a myth.

Beside his mysterious face, in Cinematic 2019, after Jhin is released and keep on murdering people in Pitlover where Camille is protecting. Jhin and Camille finally met and a fight began. In that video, Jhin only shot 2-3 times, his 4th – deadliest bullet was still available while Camille leaped from the sky using Tactical Sweep to end his life. What happened after that fight was still being considered.

Where is the ‘real’ Leblanc and why she creates Black Rose?

Leblanc – The Deceiver is the founder of Black Rose cabal, a group that already exists since the earliest days of Noxus. Even to the members of the cabal, Leblanc’s identity is still a question.

She’s famous for manipulating people and events. By using her magic to mirror herself, she can appear to anyone, anywhere, and even be in many places at once. No one is able to locate where Leblanc lives as well as her true motives, they are as inscrutable as her shifting identity.

Ezreal’s parents were renowned archaeologists. After an ambitious expedition to the lost tomb of Ne’Zuk – a Shuriman tyrant who was said to be able to jump instantly from one place to another, from that event, his parents went missing and unable to be found until today.

There are lots of theories but most of them support the fact that his parents are dead by now. Because unlike other ordinary archaeologists, they were well-equipped, if they hadn’t been killed by now, they should have been appeared by now. Of course, some theories think they are currently hiding and having the remaining gauntlet (since Ezreal only had one).

Who is The Ruined King and will he make a return back to the League of Legends universe?

The Ruined King lore takes place after the life and death fight between light and dark, the good and the evil. After a long period of battle and seeking for Thresh to rescue Senna, Lucian finally succeed by using a part of his gun to stab through Thresh’s lantern, helping Senna’s soul to escape. After the reincarnation, Senna is not the one who she’s used to be, she fused with other souls, she remains her strength and power but her knowledge is filled with memories and secrets of some Sentinels souls she freed while in the lantern.

One of the important parts of the story stated that now all the Sentinels of Light’s goal is to find the Ruined King and stop him at any cost. This knot ties the connection between Thresh, Senna, and The Shadow Isles. In the past, Ruined King had appeared in Hecarim, Kalista, etc lore quite a lot, with the symbol of a king who obsessed with the death of his Queen and eventually pushed the beautiful realm to transform into the Shadow Isles.

But with minor rumors, it’s hard to say will the Ruined King come back. With newly released champions that are such lore-attached such as Lillia, Senna, and Yone. The Ruined King may possibly become one of the next champions in Summoner’s Rift.

More news from us:

5 Types of Jungler you always meet in League of Legends

League of Legends Patch 10.16 : Syndra and Bard have been nerfed, Akali is coming back?

League of Legends: Pokimane revealed that she have had to pay a lot to maintain her livestream!!!