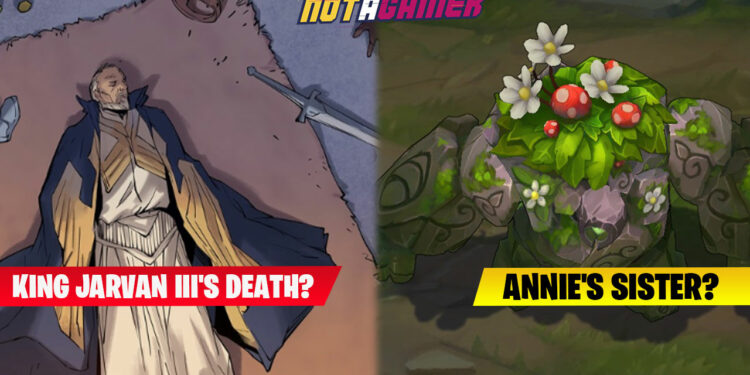 There are a few mysteries that the League of Legends community still wasn’t able to find out till this day. If you miss part 1, make sure to check it out.

The Death Of Jarvan III

After multiple plots adjusted, Demacia Kingdom – One of the oldest iconic land in League of Legends Universe, now doesn’t have the glory as it had been before. Demacia is a kingdom in turmoil. Riots after riots, wars and battles against mages, the fight for powers between noble families, and the sudden death of Jarvan III all have made Demacia into a messy place – the kingdom’s decline may be inevitable.

In Lux’s Comic, there is a page illustrates King Jarvan III is assassinated, but no one knows who kills him. In u/belegberu’s reddit post, he has a theory that Jarvan III has been killed by Marcus – A Noxian agent. We all believe that Sylas isn’t behind the king’s death and there’s no visible blood or wound around his body. Marcus may have used some kind of poison to kill him.

An assassin is not all about blades, Sylas is also shocked and denied he didn’t kill Jarvan III. Swain – The Noxian Grand General probably got information from his ravens and learned about the revolution happening in Demacia and sent his most successful assassin: Marcus Du Couteau.

3 champions that have keys on their belts in League of Legends: Zoe, Thresh, and Fiddlesticks’ lore all say they don’t have any specific purpose or motive unlike Ezreal, they’re immortal being. So what’s the main purpose behind those keys, could it be a method to open the treasure of the Ruined King, or to open a hidden secret room/place from The Shadow Isles?

Sett had humble origins, born from an Ionian vastaya and a Noxian human, the “half-beast” child was an outcast from the start. The humans of Ionia were no more accepting of the taboo union and Sett’s family was expelled for violating its tribal norms. If you think Sett’s life can’t be worse, you are wrong. After Sett’s father, who was a disappeared local pit fighter. He received multiple humiliations from such filthy mouths.

Lots of theories believe the main reason behind Sett’s father is because he’s actually Draven. Draven has an attention-grabbed personality and he always wants to stand in the spotlight. Even though Riot’s employees try to persuade fans that Draven is definitely not Sett’s father, it’s hard to separate him from the Sett.

In Sett’s biography, if you scroll until the end, you will see Draven’s biography is also displayed on the left side, even though it might be a coincidence and Riot never gives any clue to prove this father-and-son relationship, before they release more information for us, we think it’s pretty safe to claim Draven is Sett father.

The theories were posted mostly on reddit, Daisy’s first appearance was on Annie: Origin, Annie was introduced that she had a younger sister called “Daisy” – who died tragically after she had tried to chase after a butterfly.

Besides that, Ivern might be the one who saved Daisy, but Daisy might be unable to bring back to life, so instead of letting go, he transforms Daisy with his ability. A rock which is a woman gender and pretty childish combine with a little flower on its shoulder. Lulu is also known for a Yordle having an ability to transform kids into any forms, the theory might be true.

League of Legends: Champions that have the worst auto-attacks in the game.

Yone will get a brand new awesome updated on his walk animation – 10.16.